Go to Previous SlideGo to Next Slide

The Life and Cause to Sainthood of Blessed Titus Brandsma

"He who wants to win the  world for Christ must  have the courage  to come  in conflict with it.''

The promotion of the Cause to Sainthood of Blessed Brandsma is a history making milestone for the Diocese of Palm Beach. This inquiry tasks the diocese with investigating if an alleged miraculous healing  did in fact occur, one that allegedly took place here in the Diocese of Palm Beach, involving the healing of a Carmelite priest. Results and findings of the local investigation might be the proof that after careful examination by the Holy See's Office of the Congregation for the Cause of Saints may deem is the evidence needed to name Blessed Titus Brandsma a saint within the Catholic Church.

Naturally this historic process is one that creates added interest in the process of becoming a saint as well as interest in the man who would become a Carmelite priest and whose faith would put him on the path to Blessed Brandsma and possible sainthood. The Diocese of Palm Beach designed this page to help our faith community understand how does one become a saint and to help our faith community learn more about the life of Father Brandsma.

The Diocese of Palm Beach received permission from the Provincial of the Carmelites to post special biographical information on the life of Blessed Brandsma including his family life, schooling, professional career and more on his imprisonment. This page also includes pictures of his life and reveals why Father Brandsma’s works and beliefs brought him to the attention of the Nazis. There is also information on the Titus Brandsma Center in Holland.  Any reproduction of the images or information found on this page must be approved for use.

In the Florida Catholic 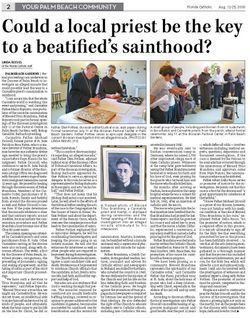 In its August 12, 2016, issue the Florida Catholic Newspaper of the Diocese of Palm Beach first broke the story on the official investigation into the alleged healing by Blessed Titus. The healing is based upon the unexplainable recovery from severe cancer by Carmelite Father Michael Driscoll, former pastor of St. Jude Church in Boca Raton. In 2004 Fr. Driscoll was diagnosed with a severe stage of metastatic melanoma cancer that was attacking his neck area behind the ear and spreading to other parts of his body. Some areas of the cancer were in the fourth stage. As a sincere devotee of Father Brandsma, he prayed for healing through the intercession of Father Brandsma. Members of the Carmelite Order, parishioners of St. Jude, friends, family and the faithful from around the diocese prayers as well.

Fr. Driscoll underwent surgery and more than 30 numerous treatments which at times were harsh. Through it all Fr. Driscoll continued to pray, even telling the Florida Catholic he was " determined to fight." His determination amazed others around him.

Doctors have stated Fr. Driscoll's cancer is now gone and have said his good health over the pages 12 years defies all odds. They have stated his healing and recovery from Stage 4 cancer cannot be explained medically.

Following the required canonical procedure for canonization, the Church’s investigation of a saint’s life and death is a lengthy, meticulous process that involves hours of interviews with witnesses and documentation. Evidence must be presented to convince officials in the Vatican’s office for declaring saints, the Congregation for the Causes of Saints, that the candidate, in fact, lived a virtuous life, had faith and had the support and help of God. Miracles are evidence that God is working through that person. Public and private writings of the proposed saint must also be gathered and examined.

As part of the investigation, Most Reverend Gerald M. Barbarito, Bishop Palm Beach, appointed Right Reverend Archimandrite Glen Pothier, the diocese’s Judicial Vicar, to serve as the Episcopal Delegate to lead the inquiry. Very Reverend Albert Dello Russo, the diocese’s Chancellor, served as the Promoter of Justice. In his role Fr. Dello Russo attested that everything prescribed by law in the investigation process has been faithfully observed, which includes interrogations, testimony and documents, pro and con.  On the part of the Order of Carmelites, Very Reverend J. Mario Esposito, O.Carm., was appointed Vice-Postulator in the Cause to Sainthood of Blessed Titus Brandsma.

The investigation also required the involvement and assistance of a medical expert, which for the diocesan inquiry was Dr. Anthony Dardano, M.D., as well as an Ecclesiastical Notary, Mrs. Elizabeth Shields, who had to verify and notarize every single document of the investigation – all 1,232 pages.

On December 12, 2017, the Diocese of Palm Beach held the Official Closing Session of their investigation into the Cause to Sainthood of Blessed Titus Brandsma at the Cathedral of St. Ignatius Loyola in Palm Beach Gardens, Florida. The Closing Session involved prayers, psalms and readings, including a reading from the sermons of Titus Brandsma. The Most Reverend Gerald M. Barbarito, Bishop Palm Beach, reflected on Blessed Brandsma's life, the faith of Reverend Michael Driscoll,O.Carm., and the importance of the investigation into the alleged miraculous healing of Fr. Driscoll. Then the key diocesan officials and key people involved in the investigation signed the pages of the documents and stamped the pages with a notarized seal. The pages were copied and stored in two boxes, and sealed in a certain manner, ensuring that they may only be opened by the Congregation for the Causes of Saints. The items will be hand-delivered to the proper Vatican office by Very Reverend Mario Esposito, O. Carm., Vice-Postulator of the Cause to Sainthood of Blessed Titus Brandsma. The original documents remain in the archives of the Diocese of Palm Beach.

Also attending the Closing Session were Very Reverend Michael Kissane, O.Carm, Prior Provincial of the Carmelite Friars of the North American Province of St. Elias, Fr. Michael Driscoll, and other Carmelite Religious Brothers and Sisters assigned and living within the Diocese of Palm Beach.

To read more on about the inquiry, please read our Florida Catholic's article titled "Could a local priest be the key to a beatified's sainthood?"

To read more about Fr. Driscoll's story -- from his illness to his involvement in the inquiry -- please read our story listed below titled "A miracle story for a priest with great faith"

To read more about the life of Blessed Titus, please read our story listed below titled "Who is Blessed Titus?"

Who is Blessed Titus? 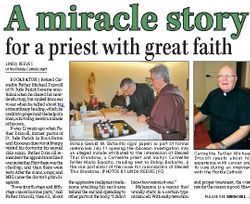 A Miracle Story for a Priest with Great Faith

From the Provincial of the Carmelites 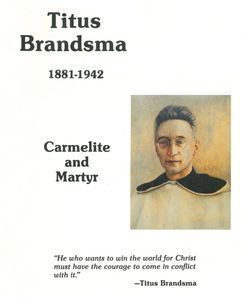 Fr. Titus Brandsma, O. Carm.: A Biography:
(an excerpt from the Provincial of the Carmelites)

The life of Titus Brandsma began  in the quiet countryside of Friesland, Holland, where  he  was  born on February 23, 1881,  and   ended some sixty  years later  on  July  26,  1942, in the  notorious hospital  of the Dachau  concentration camp.

Born Anno Brandsma, he completed high school studies with the Franciscans before entering the Carmelite  monastery in Boxmeer in September of 1898,  where he adopted his father's name, Titus, as his religious name. During the early years as a Carmelite he  showed interest in journalism and  writing,  two  activities which would occupy  much of his time later on  in life.  Titus  professed his first vows as a Carmelite in October, 1899, was ordained on June 17, 1905, and after further studies at the Roman Gregorian University,  graduated on October 25, 1909 with a doctorate in philosophy.

Fr. Titus'  entire priestly life was spent in education,  although always with a keen pastoral sense of  people's needs.  He  joined  the  faculty of the newly founded Catholic University of  Nijmegen in 1923,  and served as Rector Magnificus,  or President,  of  the University  in 1932-33.  After this time he resumed his teaching duties, and in 1935  made a lecture  tour  of the Carmelite foundations in the  United  States.

Just before this lecture tour,  Archbishop De Jong of  Utrecht  appointed  Fr.  Titus  as spiritual  advisor to the staff  members of  the   more than thirty Catholic newspapers in Holland; around the same time,  the policies of Adolf  Hitler,  the new German Chancellor, began to  be felt in Holland, and were openly criticized  by Titus in his teaching and in the press. With the  Nazi occupation of Holland on  May 10, 1940 began the open persecution of the Jews and the active resistance of the Catholic hierarchy,  who  announced on January
26,  1941 that the  sacraments were to be refused  to Catholics known to be supporters of the National-Socialist movement.

While  Titus'  involvement with  this Catholic resistance to Nazi activity was becoming more blatant,  it was the Church's refusal  to print  Nazi propaganda in their newspapers that sealed his fate.  Titus decided to  deliver personally to each Catholic editor  a letter  from  the bishops ordering them not  to comply  with a new law requiring  them  to  print  official  Nazi publications.  He  visited  fourteen editors  before being  arrested on  January 19,  1942 at the Boxmeer monastery.

Fr. Titus was interned at Scheveningen and Amersfoort in Holland before being  sent  to Dachau, where  he  arrived  on June 19, 1942.  His constitution quickly deteriorated under the harsh regime,  forcing him to enter the camp  hospital  in the  third week of July.  There he  became the  subject  of biological experimentation, before being  killed  by lethal  injection on July 26,  1942.