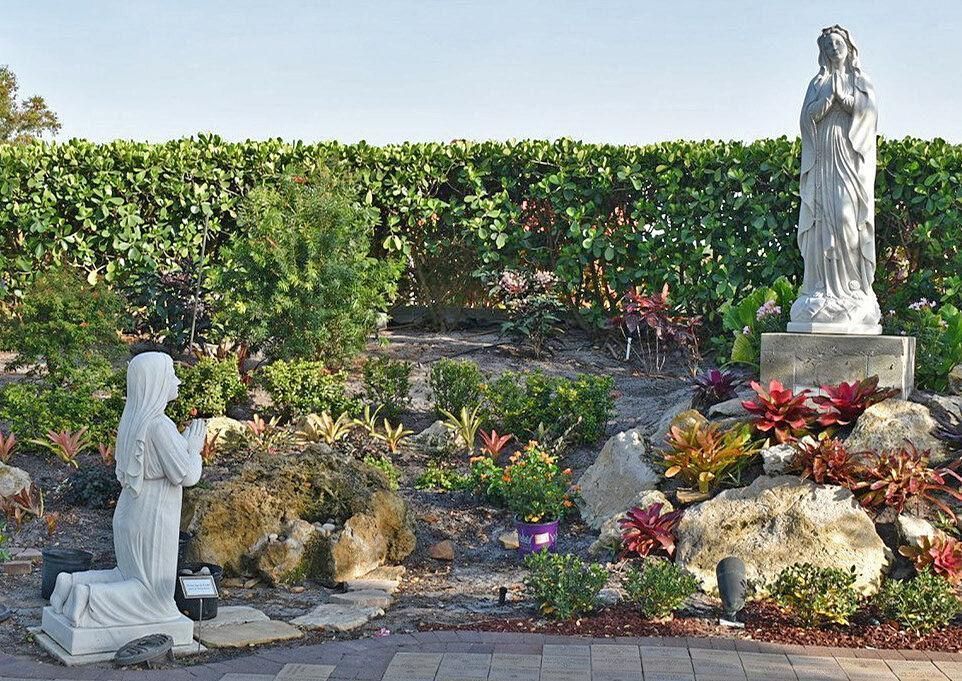 PORT ST. LUCIE  |  St. Bernadette Parish is offering a “pilgrimage” to France that doesn’t require a passport or transatlantic airfare. The Port St. Lucie parish, 350 N.W. California Blvd., will host the nationwide tour of the relics of St. Bernadette from April 19-22.

Tour stops includes 34 parishes and 26 dioceses across the United States, including three dioceses and four churches in Florida. The tour is set to end in Los Angeles Aug. 4.

The tour begins April 7-17 in the Archdiocese of Miami before coming at the Diocese of Palm Beach at St. Bernadette Church for four days. The last tour stop in Florida will be in the Diocese of St. Petersburg at Our Lady of Lourdes Parish in Dunedin from April 23-25.

A full schedule of events is planned in Port St. Lucie. Mass will be celebrated every day, besides allowing visitors to wash in and drink the water from Lourdes. The Sacrament of Reconciliation will be available as well as veneration of the relics of St. Bernadette.

“Instead of going to Lourdes, Lourdes is coming to us,” said Father Victor Ulto, St. Bernadette’s pastor. “There is a website (stbernadetteusa.org) where people can follow the schedule. There are photos of the different places the tour will be going.”

The first time Father Ulto knew there was going to be a tour with the relics was when he got a call from Msgr. Kenneth Schwanger, pastor of Our Lady of Lourdes Parish in Miami and initiator of the St. Bernadette relics tour in the states.

“He called me and told me that he just received word that this tour is going to happen, and since our parish is St. Bernadette, would I be interested in finding out if they would stop here? I was so grateful to him,” Father Ulto said. “I asked Bishop Barbarito to write a letter to the shrine at Lourdes asking if the relics could stop here at the Diocese of Palm Beach. Then the shrine of Lourdes met about six weeks ago and decided which petitions to say, ‘yes’ to, and we were one of them.”

He added, “We also have a relic of St. Bernadette right here at our church. I had the great honor of naming this church St. Bernadette because I always had a devotion to the saint. Our first pilgrimage to Lourdes, we went to Nevers, France, to the Sisters of Charity. The mother superior gave us a first-class relic of St. Bernadette, thanks to a letter written by Bishop O’Malley, now Cardinal O’Malley.

“In 2010, when we dedicated our church, I had the actual relic put into the altar stone and, at the suggestion of the builder, the relic is now covered by glass,” Father Ulto said. “It is a great source of joy to me.”

St. Bernadette Soubirous of Lourdes, France, was a 14-year-old girl when she received 18 apparitions from Our Lady in 1858.

Mary first appeared to her on Feb. 11, 1858, in a cave on the banks of the Gave River near Lourdes. The visions continued for several weeks. Two weeks after the first appearance, a spring emerged from the cave, and the waters have been credited with healing many sick people.

On March 25, 1858, the woman whom Bernadette had been seeing told her that her name was ‘the Immaculate Conception,’ and that a chapel should be built at the site.

In 1866, Bernadette Soubirous became Sister Marie-Bernard when she entered the Sisters of Charity in Nevers. She died at age 35 in 1879. The feast day of Our Lady of Lourdes is Feb. 11, the date of the first apparition.

Bernadette was proclaimed a saint by Pope Pius XI on Dec. 8, 1933. During the process of canonization, St. Bernadette’s body was exhumed and found to be incorrupt (not decomposed). The fifth and sixth vertebrae were removed for veneration by the faithful. Her feast day is April 16.

Lourdes water comes from the foothills of the Pyrenees mountains, flowing from the spring in the grotto of Massabielle within the sanctuary of Our Lady of Lourdes. The water is sought out by pilgrims to the shrine, and many claim they have been cured of a disease, condition or ailment by bathing in the waters.

Millions of people from around the world have visited Our Lady of Lourdes Shrine in France hoping to find a cure. Lourdes remains one of the most frequented Christian shrines in the world.

For more information on the U.S. relics tour, visit stbernadetteusa.org.

8 a.m.: Mass followed by Anointing of the Sick.

After Mass until 4 p.m.: visitation of the relics in church.