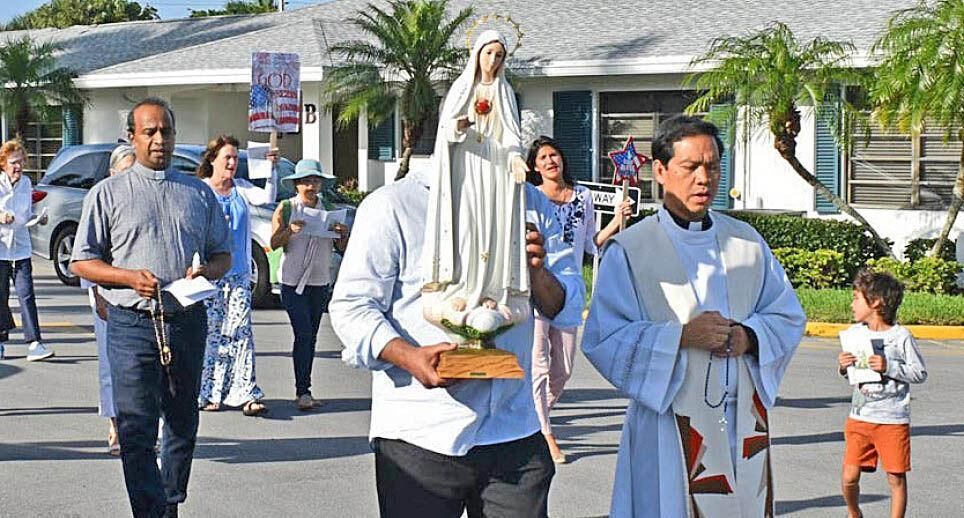 DELRAY BEACH  |  On the 105th anniversary of the second apparition of the Virgin Mary at Fatima, Portugal, June 13, Legion of Mary members at St. Vincent Ferrer Parish in Delray Beach honored the Blessed Mother with prayer, song, praying of the rosary and a procession.

“Our pastor, Father Dennis Gonzales, encouraged us to have this rosary and procession on the anniversary of each of the six apparitions of Fatima for reparation and conversion of sinners and for peace in the world and an end of the war in Ukraine,” said Lisa Vargas, Legion of Mary president, “

Legion member Eloina Lore, who prays the rosary daily, said, “Our motto is ‘To Jesus through Mary. I brought my children with me today.”

When asked about the importance of Fatima in today’s world, Father Gonzales said, “In the apparitions of Mary at Fatima more than 100 years ago, Mary told the children to pray the rosary for reparation and the conversion of sinners in order to obtain peace in the world.”

He said the message from Fatima “resonates in our world, which needs prayers for the conversion of humankind. There are many concerns in the world that threaten our peace, such as the war in Ukraine, fears of a possible recession, the coronavirus continuing to affect many people, and the lack of respect and dignity for human life.”

Catholics can help spread the message of Fatima, Father Gonzales said, by being “intercessors in the world with our prayers, particularly the rosary, which makes us strong and hopeful.”

Father Antony Wilson, a visiting priest from Kerala, India, celebrated 5 p.m. Mass also recalling the feast of St. Anthony of Padua. After Mass, Pam Lee, a Legion of Mary member, led the opening prayer to Our Lady of Fatima and Queen of the Most Holy Rosary. She read an excerpt from the Legion of Mary pamphlet titled “Honoring the 105th Anniversary of Our Lady’s Second Apparition at Fatima,” which chronicles Mary’s message to the three shepherd children June 13, 1917, at the second apparition at Fatima

“We offer the rosary today for your intentions, conversion of sinners and attainment of peace in our troubled word,” she said. “Jesus wishes to make use of you to make me known and loved. He wants to establish in the world devotion to my Immaculate Heart. I promise salvation to those who embrace it.”

Following the rosary, Father Gonzales led an outdoor procession. Ted Vargas, Legion of Mary treasurer, carried a statue of Our Lady of Fatima.

Francisco and Jacinta, two of the children who saw Mary at Fatima, were canonized as saints by Pope Francis May 13, 2017, at the Basilica of Our Lady of the Rosary in Fatima on the 100th anniversary of the first apparition.

Lucia, the third child visited by Mary, became Sister Lucia dos Santos and lived in the Carmelite convent of St. Teresa in Coimbra, Portugal, until her death Feb. 13, 2005, at the age of 97. On Feb. 13, 2017, Sister Lucia was accorded the title Servant of God as the first major step toward her canonization.

For more information on the Legion of Mary at St. Vincent Ferrer, call Lisa Vargas at 561-670-5315 or attend a meeting on Fridays at 5:30 p.m. in the parish’s Guadalupe Hall.

To read this article and others in Florida Catholic, click here.