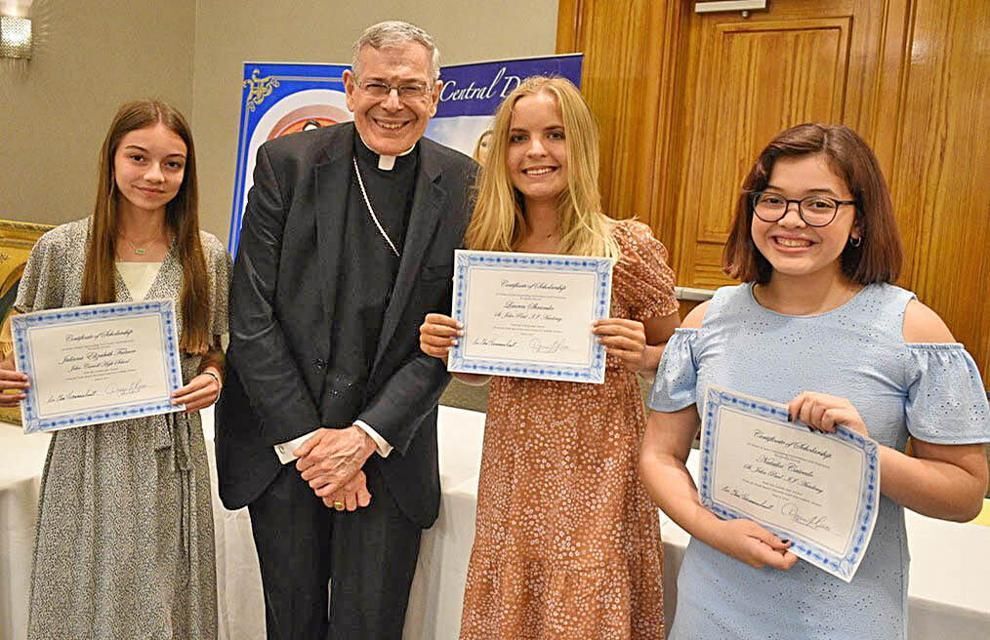 Members of Councils of Catholic Women throughout the diocese shared their joy and camaraderie June 3-4, 2022, during the 36th annual diocesan convention at the Doubletree Hotel in Palm Beach Gardens.

The theme of the event, marking the close of the 2021-22 year, was “Let us rejoice and be glad.” Bishop Gerald M. Barbarito opened the event with Mass at the Cathedral of St. Ignatius Loyola in honor of the council women. Doreen Recco, emcee and Diocesan Council of Catholic Women president, honored two diocesan council leaders who passed away this year — former president Barbara Lutton and previous treasurer Ann Behar — with a remembrance table at the convention.

Keynoter Mary Elizabeth “Maribeth” Stewart-Blogoslawski, vice president of both the North America and World Union of Catholic Women’s Organizations, gave a presentation on the path to holiness and how to attain it. She reflected about the famous passage from the Gospel of Matthew, chapter 25: “I was hungry and you gave me food, thirsty and you gave me drink, a stranger and you welcomed me, naked and you clothed me, sick and you cared for me, in prison and you visited me.”

“Stop for a moment and remember these words. They are critically important,” Stewart-Blogoslawski said. “They define how we answer the call to holiness.”

Referencing Pope Francis’ 2018 apostolic exhortation Gaudete et Exsultate (Rejoice and Be Glad),  she said, “Pope Francis reminds us that the church has always held that we are saved not just by virtue of our good works, but we must understand that all the good that we do is only through the grace of God calling us to do good works.”

Catholics are inspired to be “saints,” but Stewart-Blogoslawski said all you have to do is “be yourself.”

“When we look at the life of the saints, we see that they prayed, had a regular sacramental life, read Scripture. Mass was essential, not optional,” she said. “They submitted to the teaching authority of the Church. They lived the beatitudes. So, we all can be saints if we follow those who have ‘saint’ in front of their name.”

A highlight of the convention was the banquet dinner when scholarships were awarded to eighth graders entering Catholic high schools in the Diocese of Palm Beach. This year, there were three scholarship recipients: Juliana Elizabeth Fulmer, Lauren Shramko and Natalia Caicedo.

Juliana graduated from St. Anastasia School in Fort Pierce and will be going to John Carroll High School. She received the Northern Deanery scholarship certificate from deanery president Roxy LaChance.

At the banquet, Bishop Barbarito received a check from the diocesan council for $5,108 for the diocese’s burse fund to support the education of seminarians, as well as another check for $1,000 from the Catholic Women of Faith/Women of Action event for Catholic education.

A mock check was presented to the bishop by Janice Downs, for $3,220,293. The amount represents  the total number of volunteer hours donated by council members in the diocese.

Father Gabriel Ghanoum, pastor of St. Nicholas Melkite Greek Catholic Parish in Delray Beach, served as guest speaker on that second day. He spoke about dealing with trigger points and how to recognize and redirect anger.

“How can we put the beauty of the Catholic faith into reality?” Father Ghanoum asked. “We have the life of the saints. They lived diversity and persecution, but they put it into practicality because they were not focusing on what was happening. They focused on what is in them, and that was really the driving force guiding them.”

“We do not have to be perfect to be a saint,” he continued. “So, I give you today the spirituality of imperfection, because when we are imperfect, we don’t look at the flaws. There is only one who is perfection, and that is God.

While enemies might want individuals to focus on their flaws, God does not, Father Ghanoum said. Constantly focusing on your own flaws can take over your life and mentality.

“Remember after the resurrection when Jesus appeared, he did not go after the disciples saying, ‘You failed me, you were not there for me.’ The first thing that he did was say, ‘Peace be with you.’ What is one thing that we are missing in the world today? Peace,” Father Ghanoum said. “Do you know why you are a masterpiece? Because you are created in the image of God. But if you want to know that you are a masterpiece, you have to know how to master ‘peace.’ How can you become an agent of peace, by becoming an agent of transformation,” he added.

For information on joining the Council of Catholic Women, visit pbdccw.org.

To read this story and others in Florida Catholic, click here.