Symbols of a Bishop

The Coat of Arms of His Excellency, the Most Reverend Gerald Michael Barbarito, D.D., J.C.L. 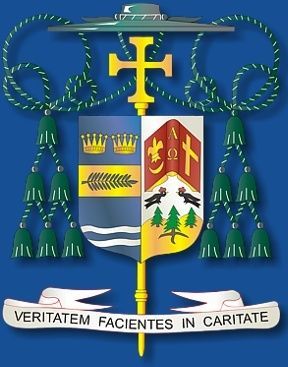 Arms impaled. Dexter’: Azure, on a fess Or between in chief two celestial crown of the second and at the base point two barrulets wavy Argent, a palm branch slipped and proper. Sinister: Argent, a open volume inverted with the cover Gules and edged Or, the spine charges with an Alpha above an Omega, the front cover with the skewed cross of John Paul II and the back cover with a fleur-de-lis above a crescent, all of the third; issuant from base, upon two hills of the third, three fur trees Vert, the center one with its roots visible Tenne, below two Moorcocks Sable, crested of the second.

The episcopal heraldic achievement, of bishop’s coat of arms, is composed of a shield, with its charges (symbols), a motto scroll and the external ornaments. The shield, which is the central and most important feature of any heraldic device, is described (blazoned) in 12th century terms, that are archaic to our modern language, and this description is done as if being given by the bearer with the shield being worn on the arm. Thus, it must be remembered, where it applies, that the terms dexter and sinister are reversed as the device is viewed from the front.

By heraldic tradition, the arms of the bishop of a diocese, called the “Ordinary,” are joined to the arms of his jurisdiction, seen in the dexter impalement (left side) of the shield. In this case, these are arms of the Diocese of Palm Beach.

These arms are composed of a blue field on which are displayed two small wavy silver (white) bars (at the base of the shield) that are used to signify the waters of the Atlantic Ocean, that dominates the geography of the region. In the center of the shield is a gold (yellow) bar, called a “fess,” on which is seen a palm branch, colored as it appears in nature (“Proper”), that is green. These conjoined symbols are used to play on the name of the See City by placing a palm branch on the golden sands of a beach, thus producing a symbol for Palm Beach. Above the fess are two celestial crowns (topped with stars) to honor the Blessed Virgin Mary in her titles of “Queen of I leaven” and “Star of the Sea.”

For his personal arms, seen in the sinister impalement (right side) of the shield, His Excellency, Bishop Barbarito, has retained the design that was adopted at the time that he was selected to receive the fullness of Christ’s most holy priesthood, as a bishop, when he was selected to be an Auxiliary Bishop for the Diocese of Brooklyn and which he used during his tenure as Bishop of Ogdensburg, in New York.

The background of these arms, known as the field, is silver (white). On this field is a unique charge. The open Book of The Gospels, designated by the gold Alpha and Omega on the spine, is placed upside-down to reflect how the Gospels are placed over the head of a new bishop during his episcopal ordination rite. For it is the Gospel that is the bishop’s helmet and under which he conducts all that he does. This particular book has the skewed cross from the arms of His Holiness, Pope John Paul II on its front cover to honor The holy Father who selected His Excellency for the Order of Bishop. The back cover bears a fleur-de-lis and a crescent to honor Bishops Francis Mugavero and Thomas Daily who ordained Bishop Barbarito to the priesthood and to the episcopacy.

Issuant from the base of the arms are the two golden hills with the three pine trees taken from the arms of the Salesians of Don Bosco because the life Saint John Bosco is for ‘Bishop Barbarito the epitome of parish priesthood. The center tree has its roots emphasized to reflect a variation on the Bishop’s name which comes from the Italian for “roots.” Above the trees are two black moorcocks, with red crests, taken from the arms of Saint Thomas More. They are used because of the Bishop’s deep devotion to Saint Thomas, for as a Canon Lawyer (J.C.L.), it was on his feast that the Bishop first began his work in the Brooklyn Chancery Offices and it was on Saint Thomas’ feast that the his Excellency was informed of his select to become a bishop.

For his motto, His Excellency, Bishop Barbarito has retained the phrase “VERITATEM FACIENTES IN CARITATE.” This phrase, which translated into English means “Let us profess the truth in love,” is taken from Saint Paul’s Epistle to the Ephesians (Eph. 4:15). By this phrase, the Bishop expresses that as Christians we are all called to profess and teach The Truth, which is Christ, in love to all.

The device is completed with the external ornaments which are the processional cross, which is placed in back of the shield and which extends above and below the shield, and a pontifical hat, called a “gallero,” with its six tassels, in three rows, on either side of the shield, all in green. These are the heraldic insignia of a prelate of the rank of bishop by instruction of The Holy See of March 31, 1969.