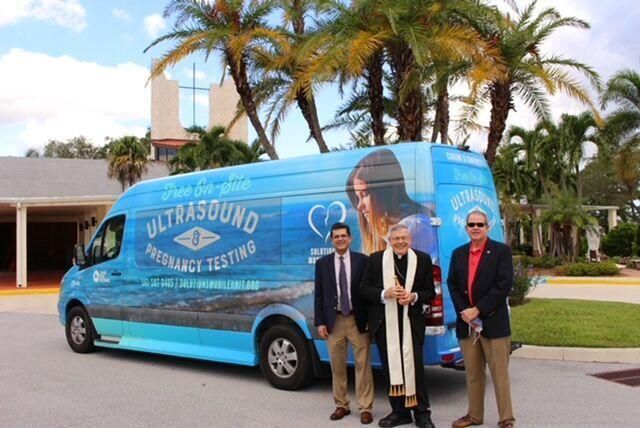 RIVIERA BEACH  |  Three essential aspects of the ministry of Women’s Pregnancy Solutions are that it is mobile, that their services are free, and that the program offers the truth to women facing a difficult situation.

What began in 2013 as a ministry of God’s Resources Inc. transitioned late last year to a program administered by Catholic Charities of the Diocese of Palm Beach. After two months of training, Kenda Peterson began in January as program director of Women’s Pregnancy Solutions.

Born in Iowa and moving to Boca Raton as a child, Peterson is a veteran of the nonprofit world with previous executive positions with Boys and Girls Clubs of Palm Beach County and Youth for Christ in Jacksonville. Although Peterson’s current position is her first shot at leading a pro-life organization, she understands first-hand what women face during an unplanned pregnancy. She became pregnant in high school after being date raped.

“Because of my faith I did not choose abortion. I chose to have that child and place her up for adoption,” she said. “So, God walked me through that. It was not an easy process.”

She added the experience has left her grieving for years, but she has no regret in choosing life over abortion.

“Truly, when people came into my path who had that crossroad – do I choose life or do I choose abortion? – I had my story,” Peterson said. “And so, I always ask God to use that story. I went into youth development in my early 20s and worked in youth ministry from age 23 to 32 at a church and started pouring truth into children’s lives so that they would be spared that.”

When Peterson began working for Catholic Charities, she thought it would start slow. But she and her staff of three, along with volunteers, have hit the ground running. They use Google Ads to target people seeking abortion services, take phone calls to a hotline 24/7 and arrange to meet clients.

The Women’s Pregnancy Solutions vans generally stay in one location. “However, being mobile, we have been known to go to homes if need be,” she said. If a woman is afraid to reveal that she might be pregnant, the van can meet her at a discreet site.

“We have amazing staff who speak truth into this, and when we talk to them about life and they see that baby on the full screen and hear the heartbeat in surround-sound, it moves them,” Peterson said.

In January, the first month that she led the program,19 abortion-minded women contacted the program. Fifteen chose life for their baby, three had miscarriages and one sadly chose to have an abortion, Peterson said.

As more local women hear about the loving, compassionate services offered by Women’s Pregnancy Solutions, she has seen an increase in client interest. And Peterson expects even more need for services after a decision by the U.S. Supreme Court in Jackson v. Dobbs, along as when abortion restrictions become law.

“We have a lot of women who call up and say, ‘I just want to know how far along I am. Am I at that point?’ But once they see the truth, a lot of times they have a change of heart because society lies to them and says, ’It’s just a bunch of cells.’ So, thank God for technology. Hopefully we can spare them that choice,” she said.

As gut-wrenching as it is to have a client go through an abortion even after being told the truth, the success stories far outweigh the failures. A recent case involved a woman who whispered into the phone that she had to know that day if she was pregnant. Later, the young woman was able to see her child on the sonogram and, with her boyfriend, decided to have the baby. The program’s client advocate arranged for the couple to receive counseling and other assistance.

Part of the advantage of Women’s Pregnancy Solutions being part of Catholic Charities is that Peterson and her staff are able to have access to the full range of assistance that is available through the larger agency.

Many women who approach Women’s Pregnancy Solutions have already been through an abortion, she said, in which case they are given help along with information on healing and forgiveness.

Peterson admits that she hasn’t been involved in the program very long, but “One thing that has been evident is God shows up in ways that I couldn’t imagine in this ministry. It’s humbling to be a part of it. I daily thank God for this opportunity that he chose me to be a part of it.

“I take very seriously the lives and the souls that we’re dealing with — from the unborn to everyone else in the family. Literally every day when I’m on my way to work I’m happy, and on the way home I’m happy just knowing that he’s working, and we’re giving the truth to these women who have been lied to for years,” she said.

As with any kind of nonprofit endeavor, funding is an ongoing challenge, especially in a ministry that relies on gasoline-powered vehicles when the price of gas is hitting all-time highs. Peterson said that, except for one small grant, the operations of Women’s Pregnancy Solutions are funded through individual donations. “There’s not much out there for just trying to save a life,” she said.

Besides donors, the program is seeking volunteers to be trained as client advocates or answer telephone calls. Peterson also said Women’s Pregnancy Solutions welcomes local residents with particular gifts such as fundraising or event planning to serve on the advisory committee. She would love to talk with anyone who has a heart for saving lives.

One immediate need is finding a building or shopping center owner in Port St. Lucie or Martin County who will allow the program to park their van and take appointments a few days a week.

“God is opening doors. He really has,” Peterson said. “I’m amazed since January how much the word has gotten out and how many people I’ve been able to meet while trying to juggle so many other things.

“When we are the hands and the feet and the eyes and the ears that God has asked us to be, there’s a lot less pain. And if I could get a post-modern culture to understand that God doesn’t tell you to not do these things because he doesn’t want you to have fun in life. He’s trying to protect you from pain.”

To read this story and other stories in Florida Catholic, click here.