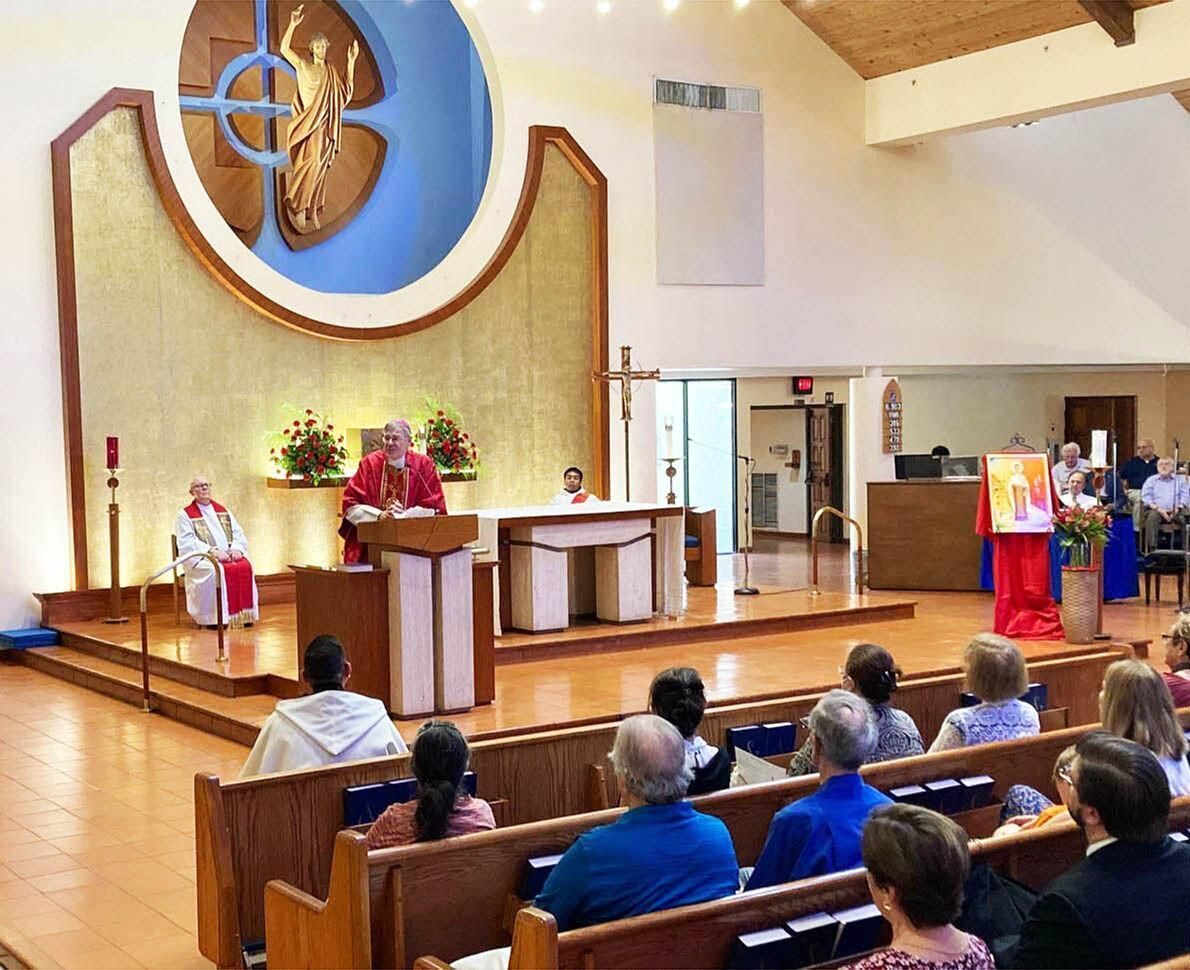 BOCA RATON  |  Eighty years after the death of Carmelite Father Titus Brandsma in the Dachau concentration camp in Germany, the first feast day of the newly canonized saint was celebrated July 27. The intervening years were filled with much contemplation of his legacy, prayers for his intercession and a sainthood investigation.

Bishop Gerald M. Barbarito, who opened the canonization process for then-Blessed Titus in the Diocese of Palm Beach, presided at the St. Titus feast day Mass at St. Jude Church in Boca Raton. Concelebrating with him was Carmelite Father Michael Driscoll, the priest who was found by a Vatican probe to have been healed of deadly melanoma skin cancer because of prayers to Blessed Titus.

In welcoming the bishop, Carmelite Father John Horan “set the scene” by talking about Father Titus, who was proclaimed a saint May 15, 2022, by Pope Francis.

“Titus Brandsma was killed because he was a man passionately committed to the truth that all people have dignity, worth and that all are children of God. We gather here today on the first feast of the newly canonized St. Titus Brandsma,” Father Horan said.

“This prophet of non-violence, this witness to the dignity of the human person, this man of prayer and service has much to teach us who desire to live fidelity to the teachings of Jesus Christ today,” he added.

Father Horan expressed his delight at seeing so many parishioners, friends, seminarians, religious and clergy of the diocese at the special liturgy. He especially thanked Bishop Barbarito for his support of the canonization process.

“Whenever the story of the process is told, you, along with Father Albert (Dello Russo) and Father Glen (Pothier), will have a place of prominence, and we will forever be grateful to all of you,” Father Horan said.

In his homily, Bishop Barbarito spoke of St. Titus’ example as someone “who lived his Christian life to the fullest.” He was a man of great gentleness, charity and love, the bishop said, but also someone with his feet firmly planted on the ground and dedicated to his work. Because of his commitment to the truth, Father Titus attracted the attention of evil men in Nazi Germany, who had him imprisoned and eventually killed by lethal injection.

The bishop recounted the story of the woman who gave the fatal shot of carbolic acid to Father Titus. Before she gave him the injection, he handed her the rosary that he had made while in prison. Years later, the woman said it was that gesture that turned her back toward Jesus Christ.

That’s a lesson that we can all learn from today, Bishop Barbarito said – the necessity to treat others, no matter their stage in life, with love and respect, even if we disagree with them. “In our own families in particular, as we take the time to be with them, to love them, to teach them through our words and our example, we live the holiness to which God has called us,” he said.

An artistic depiction of St. Titus Brandsma was displayed near the altar at the liturgy, containing one of his quotes: “He who wants to win the world for Christ must have the courage to come to conflict with it.”

At the Mass, the St. Jude music ministry sang a hymn, “Stay With Me, Jesus,” with words based on a poem by St. Titus Brandsma called “Before a Picture of Jesus in My Cell.” The poem was put to music by Carmelite Father James Boyce, an accomplished musician who taught at Fordham University.

At the end of Mass, Father Horan explained that, soon after Father Boyce composed that music, he was diagnosed with the pancreatic cancer that killed him in 2010.

“He really lived that ‘I will not fear if I could reach out and feel your hand, Lord,’” Father Horan said. “And all of us, we all have things in our life that sometimes cause us concern and make us feel a little frightful. But if we can remember, if Titus in the hellhole of Dachau was able to write those beautiful words and live them, and know that he’s there to reach out and feel the Lord, the Lord is reaching his hand out to each and every one of us. All’s we have to do is grasp it, right?”

After greeting his friends and well-wishers afterward, Father Driscoll told the Florida Catholic that he was grateful for the love and support he received through his cancer battle and the canonization of St. Titus.

For background on the diocese’s work on Blessed Titus’s sainthood cause, visit www.diocesepb.org/ministriesoffices/offices/tribunalcanonical-affairs/fr-titus-brandsma.html. To see a performance of “Stay With Me, Jesus,” visit https://youtu.be/hu2kmcUUVf4. For more on St. Jude Parish, go to https://stjudeboca.org/ or follow @stjudechurchboca on Facebook.