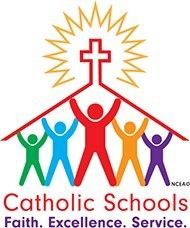 As communities of faith, Catholic schools instill in students their destiny to become saints.  Academic excellence is the hallmark of Catholic education intentionally directed to the growth of the whole person – mind, body and spirit.  Finally, service is fundamental to Catholic education and the core of Catholic discipleship.  Service is intended to help form people who are not only witnesses to Catholic social teaching, but also active participants through social learning.

National Catholic Schools Week (CSW) is an annual celebration of Catholic education in the United States. Now entering its 48th anniversary year, CSW has traditionally been held the last week in January. It starts the last Sunday in January and runs all week, which in 2022 is January 30 – February 5. The theme for National Catholic Schools Week 2022 is “Catholic Schools: Faith. Excellence. Service.”  Schools typically observe the week with Masses, assemblies and other activities for students, families, parishioners and community members to celebrate.