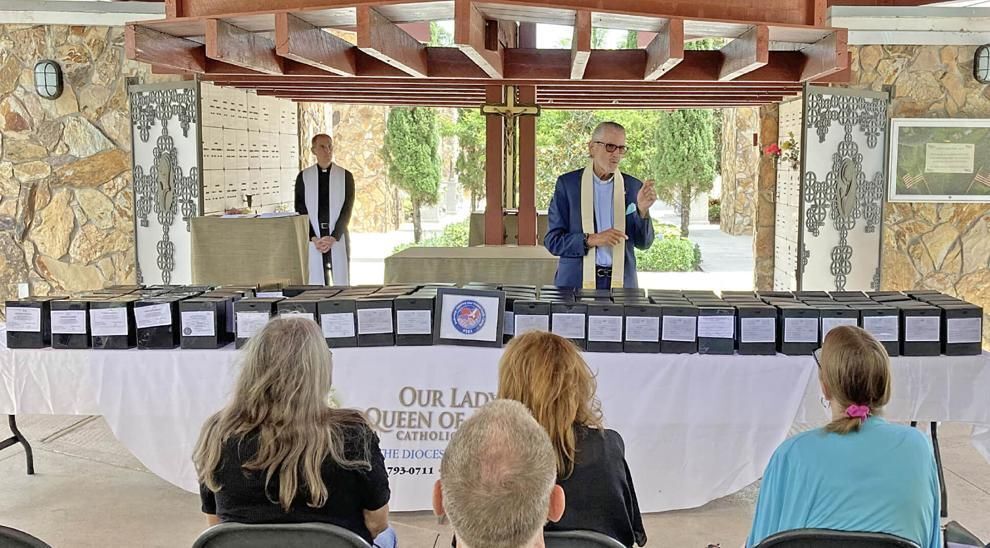 ROYAL PALM BEACH – Every deceased person deserves to have a dignified burial. That is the message behind No One Buried Alone, a partnership between the Diocese of Palm Beach, Our Lady Queen of Peace Cemetery and the Palm Beach County Division of Human Services.

Following the 11th annual No One Buried Alone memorial service July 6 at the cemetery, the cremated remains of 111 souls were laid to rest. All of them were either abandoned at death or died with no family or friends to take care of funeral arrangements. That’s where Father Gabriel Ghanoum came in.

As director of the No One Buried Alone ministry, Father Ghanoum accepts responsibility for the remains when no one else comes forward. At that point, signing the papers and accepting the remains, he becomes their adopted family, he said.

“We have a responsibility to care for them,” said Father Ghanoum, director of palliative and spiritual care at HCA Florida JFK Hospital in Atlantis and affiliated associate professor for the University of Miami Miller School of Medicine. He is also pastor of St. Nicholas Melkite Greek Catholic Parish in Delray Beach.

“Many of them, I don’t know if they were Christian, Catholic, Jewish, Buddhist, believer, nonbeliever. It doesn’t matter,” he said. It only matters that we love and respect them and give them eternal rest, he added.

During the service, Father Ghanoum kissed the boxes containing ashes and told each deceased person that he loved them. He said that a 10th crypt was opened to inter the remains for the ministry, which began in 2011.

He explained afterward that, through the years, long-lost family members have come forward after the remains were interred. When they learn the dignified manner in which their loved one was cared for, it gives them a sense of peace.

Adriana Gorrondona, supervisor for community services of Palm Beach County and co-founder of the ministry, said, “No One Buried Alone is a program that was created out of deep concern and compassion for members of our community that, at the end of their lives, found themselves with no family or friends.”

She thanked the cemetery for its generosity in providing a final resting place for the individuals. Gorrondona also praised the county for partnering with the program. She said those who attended the service showed that the community cares about all people without discrimination.

Also participating in the memorial service was Katarina Bleichner, a student at St. Brendan High School in Miami who became aware of the No One Buried Alone ministry and promoted it at her school.

Father Gavin Badway, rector of the Cathedral of St. Ignatius Loyola, assisted Father Ghanoum during the service. Father Badway reminded those gathered for the service that “We are all brothers and sisters. So, all of these people, even though we don’t know their stories today, they’re our family.”

For more information about the cemetery and how to donate to the No One Buried Alone ministry, visit https://ourqueen.org/no-one-buried-alone/.