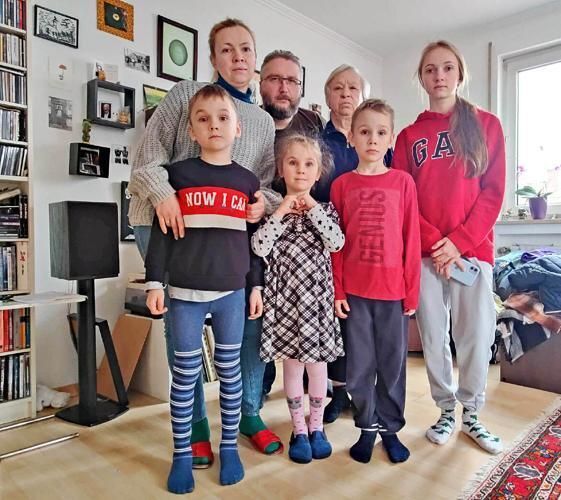 BOCA RATON  |  Since Russia began attacking Ukraine in February, millions of Ukrainians have been scattered to the four winds around the globe.

Most are being resettled in European nations, but there are some who make the complicated trek to the United States and being welcomed by residents here. Ron and Janet Sheldon, members of St. Joan of Arc Parish in Boca Raton, recently welcomed a family of seven Ukrainian refugees who had arrived at Fort Lauderdale-Hollywood International Airport Aug. 17, 2022. Their odyssey was about four months in the making.

The retired couple reacted with compassion at the plight of Ukrainians fleeing Russian bombs and bullets. Shortly after the war began, Ron discovered an internet-based program that aims to match Ukrainian refugees with people willing to help them, so he signed up.

In April, President Joseph Biden announced an effort — Uniting for Ukraine — to allow up to 100,000 Ukrainian refugees into the United States. That is when Ron, an active member of the Knights of Columbus for 35 years, was contacted by the Pavlov family.

“They had fled Kyiv and they were sheltered in the Netherlands,” he said. “So, that began the process of me documenting an application to sponsor this Ukraine family through the Department of Homeland Security.”

The Knights held a dinner-dance April 30 at Our Lady of Lourdes Parish in Boca Raton to support local resettlement efforts and raised more than $4,000, Ron said. At the same time, a resident donated the use of an apartment for six months.

On May 15, Ron received an email from a Ukrainian woman and her daughter who had traveled from Ukraine to Hungary to Belgium to Mexico and into the United States, ending up in Deerfield Beach. Since they were in dire need of housing, he arranged for both of them to occupy the donated apartment.

After dealing with reams of government red tape and help from government officials, the Pavlov family — which includes a 44-year-old man, his 40-year-old wife, four children, ages 17, 9, 7 and 4, and a 75-year-old grandmother — received approval in early July to enter the United States.

Relying on favors from friends and strangers, the Sheldons were able to come up with money for the family’s airfare and other expenses. Fellow Knights and parishioners from St. Joan of Arc, St. Jude and surrounding parishes have been so generous. Even his high school classmates have donated money.

“Everyone has just been very understanding. There’s a lot of support for these refugees from Ukraine,” he said.

“We have a fellow that’s committed a house for us to use for a couple of months to help them, and we have other people here in town who have volunteered their services to help with transportation, school registration, immunization, doctors and dentists, general assistance. … People from Ukraine who already live in the United States and are United States citizens have been coming forward to help with translation and resettlement.”

Refugees are normally given a time limit to live in the United States, unless they apply for a change of status. For the mother and daughter who came in through Mexico, their “parole period” is 12 months; for the Pavlov family, it’s 24 months.

“The sponsor, which is me and my wife, Janet, basically agree to support them for 24 months,” he said. “In the process, we will try to get their status changed and allow them to have work visas. They (the Pavlovs) want to stay in the United States.”

One urgent need that the Sheldons were concerned about was having a vehicle that the Pavlovs could use. But even that was taken care of when the family arrived.

Waiting for hours at the Fort Lauderdale airport for the family to arrive and clear customs, the Sheldons spoke with two Ukrainian women who had volunteered to serve as translators for the Pavlovs. One of the women had just returned from Boston, where her American sponsor from 10 years ago had died. While in Boston, she learned that the man had bequeathed all of his possessions to her, including a car.

“She drove from Boston to Florida with his ashes in the passenger seat,” Ron said. “Now she was uncertain how to handle the automobile. So, our mighty God placed this lady, this conversation about an additional automobile in our three-hour waiting period, which resulted in the agreement for the Pavlov family to use it.”

The family is occupying temporary housing in the Boca Raton area, so there is need for a more permanent residence. With monthly rent in the range of $2,500 to $4,000, financial support will be imperative.

“With a family of seven, you definitely need a three-bedroom-plus place. So, that’s a big number,” Ron said.

Anyone who is able to help can send a tax-deductible check, payable to Catholic Charities, to 1550 S.W. Seventh Court, Boca Raton, FL 33486. The memo line should say “Ukraine.” To contact Ron Sheldon, email ronnsheldon@gmail.com.