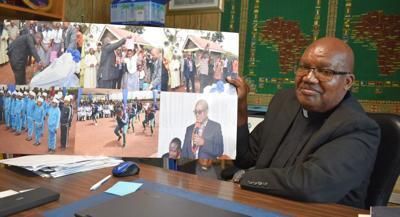 NORTH PALM BEACH  |  In addition to his pastoral work at St. Clare Parish in North Palm Beach, where he is parochial vicar, Father Mark Mlay has a mission in Moshi, Tanzania, to improve the lives of street orphans through education, both religious and academic.

“By providing an education to children, you can change their lives,” he said. “When you give a child a chance for a good education, you don’t know what you are making of that child in the future. Many of the orphans’ parents died during the AIDS epidemic and now COVID.”

Father Mlay was born in Tanzania along the slopes of Mount Kilimanjaro. Since he was 10 years old, he knew he had a calling to the priesthood fostered by his respect and admiration for the local Catholic priest.

Father Mlay was ordained June 27, 1984, after graduating from Peramiho Catholic Major Seminary in Songea, Tanzania, with a bachelor’s degree in philosophy and theology. He remained in Moshi teaching seminarians for his community, Apostolic Life Community of Priests, until 1993, when he went for further studies in Rome.

“I was then a parish priest in the Diocese of Reggio Calabria in Italy as a teacher and formator of seminarians from my community, who were sent for theology in Italy, until I was transferred to the Diocese of Palm Beach in 2002,” Father Mlay said.

The priest goes back to visit his hometown in Moshi every year. He met with the bishop of Moshi in 2012 and asked for permission to establish a religious community of nuns and build an orphanage and preschool. The bishop granted permission to Father Mlay and his co-founder, Sister Mary Jennifer Wandia.

“When I came back from my vacation, I went to see Bishop Barbarito and told him I got permission from the bishop in Moshi to begin a new community of nuns and to build an orphanage and pre-K school,” he said. “He gave me a written letter of permission.”

Father Mlay’s mission of improving the lives of orphans in Tanzania has become a reality. In the same year (2012), he and Sister Wandia founded a nonprofit organization, Adorer Missionary Sisters of the Poor, registered in Florida.

They obtained funding to purchase a piece of land in Tanzania to build a convent, orphanage and preschool, which expanded to an elementary school in 2014 and high school in 2016, with plans now to build a college. The Adorer Missionary Sisters of the Poor have seen growing numbers of vocations with 14 vowed, two novices, three postulants and four candidates.

“We started with 19 pre-K orphans and now we have an elementary and a high school. We now have 550 students,” Father Mlay said. “Right now, we are planning to open another house in Nairobi, Kenya, where there are many orphans and street children because of COVID and AIDS.”

When the orphanage was in need of drinking water, the community prayed through the struggle. They attempted to drill wells three times with no success.

“There was an underground river from Mount Kilimanjaro. We had an incident or an earthquake,” Father Mlay said. “The top of the ground over the underground river sunk, forming a freshwater lake right near the orphanage known as Lake Chala,” adding that he feels it was a miracle to receive access to the water.

Eucharistic adoration is a priority for Father Mlay at St. Clare and at his mission in Tanzania. “When we had COVID and everything was shut down, I thought of invoking God. I brought the monstrance outside, and a good number of people gathered in a procession around the parking lot,” he said. “At St. Clare, we have Eucharistic adoration and a procession every 16th day of the month from 8:30 a.m. until 8 p.m.”

For more information on the orphans in Tanzania, visit www.adorermissionarysistersofthepoor.org or email Father Mlay at markmlay@yahoo.com.