Parish offers tutorial on how to dispose of sacramentals 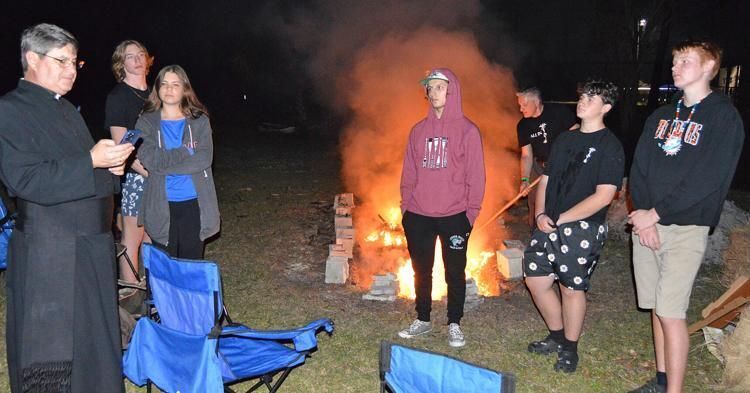 JENSEN BEACH  |  A sacramental is a sacred sign that bears resemblance to the sacraments. According to the Catechism of the Catholic Church, “They signify effects, particularly of a spiritual nature, which are obtained through the intercession of the church. By them men are disposed to receive the chief effect of the sacraments, and various occasions in life are rendered holy” (1667).

Sacramentals include religious articles such as rosaries, scapulars, blessed holy cards, crucifixes, statues, Bibles, missals, Lectionaries, holy water and oils, liturgical vestments and altar cloths. But what are you to do with them when they break, become tattered and worn out?

Father J. Scott Adams, pastor of St. Martin de Porres Parish in Jensen Beach, offered a teachable moment for parishioners outside the church Dec. 18, 2022, after the 6 p.m. Sunday Mass, with disposal of old items with religious and civic importance.

“Eventually sacramentals wear down, crucifixes break, as do rosaries, candles burn out, scapulars tear and wear out, and if the sacramental reaches a state where it is beyond repair or beyond its effective use, the object should be disposed of properly,” Father Adams said. “And the proper way to dispose of a sacramental is to burn it or bury it.”

Greg Cannata, the parish’s director of family life and faith formation, oversaw the careful digging of a pit and building of a fire in the open field behind the church, with assistance from youth group members, some of whom are Eagle Scouts.

Parish teens Justin Cannata, who is Greg’s son, and Chloe Sebuck talked about what they learned from their participation.

Sacramentals are “a lot more important than a lot of people realize. You can’t just discard them. They’re almost like people. They need to be treated properly, even at the end,” Justin said.

Sebuck added that “I feel like this is the best way to do it. You don’t want to throw it away, and I like how we gather together and Father’s here and we can invite people together as a group.”

Greg Cannata instructed the helpers on how to put the items into the flames one at a time with reverence. All those gathered recited the Prayer to St. Michael and other prayers during the burning.

Father Adams, reading from online source material, said, “Catholics must be vigilant and responsible with them because they’re sacred, blessed items.” Quoting from the Code of Canon Law (1171), he said, “Sacred objects, set aside for divine worship by dedication or blessing, are to be treated with reverence. They are not to be made over to secular or inappropriate use, even though they may belong to private persons.”

This was the second Advent that Father Adams organized the disposal of sacramentals. He said the process of disposal usually starts in the church sacristy.

“We’ve got leftover consecrated oils from the chrism Mass. We’ve got to dispose of them,” Father Adams said. “Then people tend to turn in things that are either broken or in disrepair.”

The altar linens, especially corporals and purificators, get a bit tattered over years of use, he said. “These things accumulate over time. They’re just taking up space. We bring them out here and it’s a good opportunity, particularly when the weather cools, to do this.”

Father Adams said he learned how to dispose of sacramentals when he was a seminarian. When the church updated scriptural translations, there were many old books that were not being used anymore. The seminary rector announced that they were going to have a fire to dispose of the books and other items, he said.

“I thought it was a pretty interesting experience for me in seminary and I thought, well, I think we can do that here, too,” Father Adams said, where there are open spaces and a fire station directly across the street if things got out of control.

“You also have to have someone who knows what they’re doing. We don’t just come out and throw stuff on a fire,” he added.

Furthering his point that sacramentals should be respected, Father Adams said that they’re not playthings, fashion accessories or home decorations. Containers of holy water shouldn’t be thrown into a junk drawer or religious items tossed around like loose change.

“Some people think it’s a great witness to wear a rosary around their neck. We have to be careful that we’re not trivializing or exaggerating devotion with practices that may then become a stumbling block to the use of sacramentals for other Catholics and non-Catholics,” he said.

With the same reverence, the group burned a few tattered American and Vatican flags that had been turned in for disposal. The group recited the Pledge of Allegiance and a few prayers, along with singing “God Bless America.”

For more information on activities at St. Martin de Porres Parish, visit www.stmartindp.com. For upcoming events in the Diocese of Palm Beach, go to www.diocesepb.org/news.

To read this and other articles in Florida Catholic, click here.