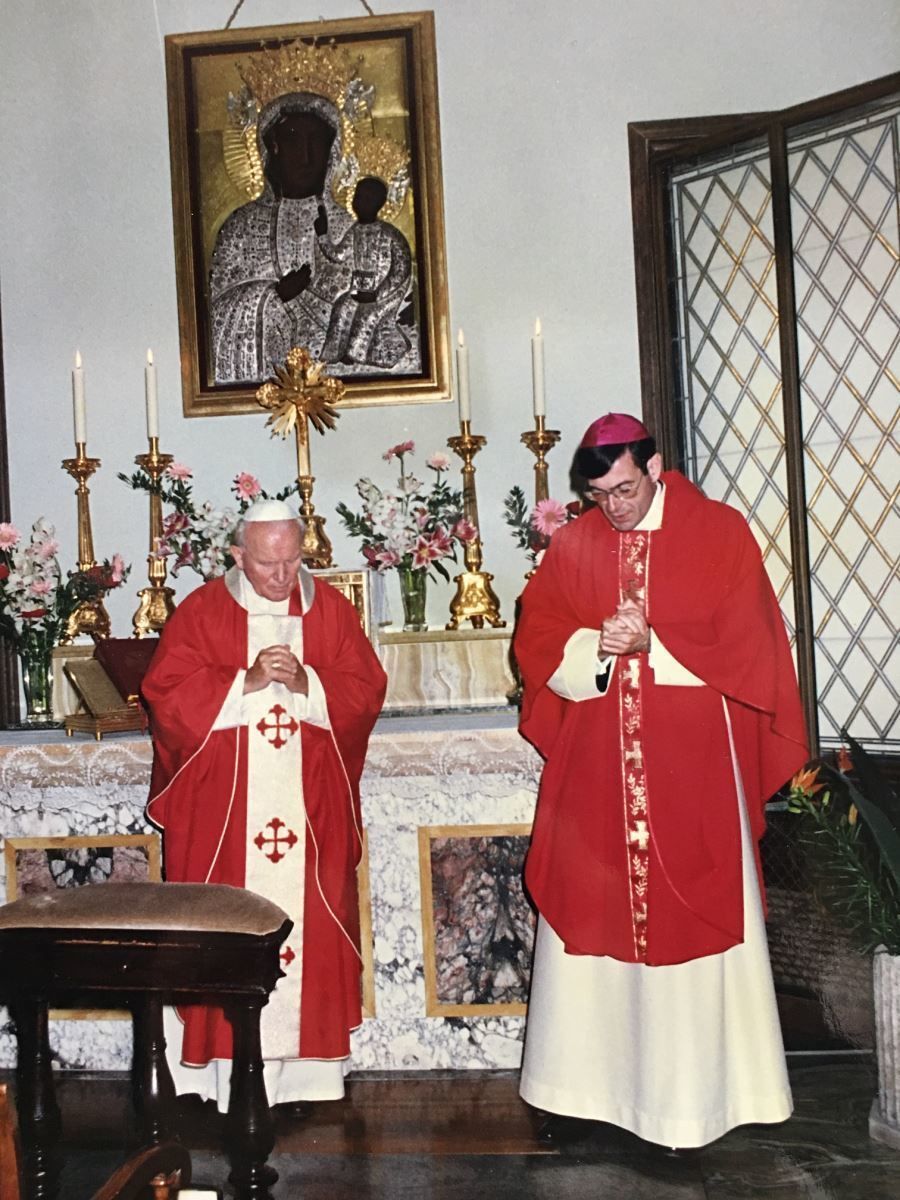 October 22 is the Feast of Saint John Paul II.  His feast is celebrated on the day when he was formally installed as the Chief Shepherd of the Universal Church.  He was elected the 264th Pope on October 16, 1978, and chose to have a relatively simple Papal Installation rather than the usual coronation.  From the very beginning of his pontificate after his election, when he announced to the crowd gathered in Rome, “Do not be afraid”, to his final  frail but loving appearance on Easter Sunday before his death in April 2005, Pope John Paul II displayed the myriad qualities of his life which made him a Saint.  It is also fitting that we celebrate Saint John Paul II during the month of the Rosary as he lived with deep devotion to Mary.  In his Apostolic Letter of October 17, 2002, Saint John Paul II added five new decades to the Rosary in the Luminous Mysteries.

Saint John Paul II truly was a man of prayer.  From his earliest days to his final breath, he demonstrated his deep union with the Lord and the priority that prayer was for his life.  On the occasions that I was privileged to have been in the presence of Saint John Paul II, both on my visits to Rome to meet with him, as well as on his visits to the United States, he exhibited a closeness to the Lord which was a personal inspiration for me and all those who were with him. There is no question that he was a mystic.  When I had the privilege to concelebrate Masses with Saint John Paul II, including a private one with him, he obviously went into a deep union with the Lord which drew others into the same centeredness with Christ.  It was obvious that everything that he spoke concerning the Eucharist came from his heart which was the center of his life and priesthood.

Saint John Paul II truly was a man of closeness.  This closeness was not only to the Lord but to the people he served.  He continually went out to find people.  He traveled the entire world visiting 129 countries during his Papacy and logging more than 700,000 miles.  In all of his visits, as well as his encounters with those who came to him in Rome, he showed himself to be one with the people.  There was no pretension around Saint John Paul II.  He was an authentic person and in his presence everyone felt at ease

This closeness to people is well expressed by his personal secretary, Cardinal Stanislaw Dziwisz, who was his assistant for over forty years, both as Archbishop of Kraków and as Shepherd of the Church.  Cardinal Dziwisz wrote an account of his personal recollections of Saint John Paul II entitled, A Life with Karol.  Over and over, the Cardinal recounted situations in which Saint John Paul II wanted to become one with others in all aspects of life.  He spoke of how, “Even after becoming a bishop, he would go to the Franciscan church for confession and get in line with other penitents.”  The Cardinal recounts how, in his early days as Pope, he would secretly accompany the Holy Father out of the Vatican for some short day ski trips.  Though quite light in tone and comical in context, the Pope’s propensity to identify with others was evident here as well.  Cardinal Dziwisz states, “The Holy Father acted like a totally normal skier.  He was dressed like everyone else: parka, cap, goggles.  He stood in line with everyone else.”  I was personally struck by the repetition of the refrain, “He stood in line with everyone else,” as it reflects the fundamental aspect of the Incarnation and of Saint John Paul II’s identification with it.

One could go on for thousands of pages writing about the greatness of Saint John Paul II and indeed hundreds of volumes have been written about his life, sanctity, and teaching.  Saint John Paul II lived as an authentic person and this was the center of his holiness.  When one was with him, whether a world leader or a child, one knew the depth and sincerity of the man.  He embraced humanity and enabled those who met him to embrace their own.  This full acceptance of his humanity is at the heart of the Incarnation and the holiness of the Saint.

The funeral for Saint John Paul II was unprecedented in history.  From the youngest to the oldest, from Catholics to non-Catholics, everyone somehow became one at the death of Saint John Paul II.  The phrase chanted at his funeral, Santo Subito, a Saint Soon, quickly became a reality.  So many of us are blessed to have lived in the time of Pope John Paul II’s Pontificate in which we encountered a Saint!