Living the Truth in Love - Our Patroness, Mary, Queen of the Apostles 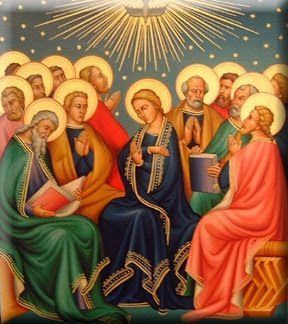 On October 24, we celebrated the Thirty-sixth Anniversary of the establishment of our Diocese.  At the onset in 1984, Mary, under her title as Queen of the Apostles, was chosen to be our patroness.  Mary epitomizes the ministry of the apostles in every way as she is the Mother of the Church and the model Christian.  There is no one who cooperated more closely in the life and ministry of the Lord Jesus, than Our Lady herself.  While we never see Mary teaching and preaching, her quiet role as Queen of the Apostles gave them the example of what their ministry was about.  Mary is the first among the apostles as the preeminent preacher of the Gospel, especially as she handed onto them what she treasured in her heart about the life of Jesus from the moment of His conception in her womb.

The Lord began His public ministry at the prompting of Mary.  At a family wedding party when the wine for the celebration ran out, we read in the Gospel of Saint John that it was Mary who prompted the Lord to work His first sign, which He had not intended.  When the Lord was teaching and preaching, it was Mary who was the perfect example of what He taught: “Blessed are those who hear the Word of God and observe it” (Lk 11:28).  Mary was not present at the Last Supper, that act which would carry on the Lord’s ministry in the most perfect way through the Mass.  However, as Saint John Paul II often reminded us, it was from her body and blood that the Lord was born.  That is why she was present at the Last Supper in a sublime way when Christ said, “This is my Body, this is the cup of my Blood.”  Mary stood silently at the foot of the Cross.  She was present on Pentecost when the Holy Spirit came down upon her and the Apostles at the birth of the Church, that body which would carry on the Lord’s ministry for all ages.  So close is the cooperation of Mary in the saving mission of Christ that the Second Vatican Council referred to her as the Lord’s “associate of unique nobility” (Lumen Gentium, 61).

Mary gave the supreme example of humility to the apostles as she does to all of us.  Her life was one that is a model of what it means to be humble.  Humility is essential to the Christian life and to the ministry.  Mary knew who she was.  She did not put herself down but allowed God to act through her knowing, that His action was what mattered.  As unworthy as she was of the many graces God lavished upon her, Mary accepted them graciously, knowing that they all depended on Him.  Unlike the apostles, who often argued among themselves as to who was first and who was the greatest, Mary never saw her gifts as her own but as God’s.  She put herself last and because of this she was always the first.  She used her gifts for the good of her Holy Family, for others, for her neighbors, and ultimately for all of us.  She knew all depended on her Son and she always looked away from herself and to God.

We are all in need of that humility.  Too many times we can be like the apostles, arguing among ourselves as to who is the greatest.  We must put Christ and His Church first and realize it is not about us but about Him.  It is neither my service nor ministry, it is Christ’s.  In that comes a great freedom and a great joy.  Mary’s prayer, the Magnificat, is the perfect expression of her humility: “My soul proclaims the greatness of the Lord; my spirit rejoices in God my savior.  For He has looked upon His handmaid’s lowliness; behold from now on all ages will call me blessed” (Luke 1:47-48).

The Magnificat leads us to another essential which Mary placed before the apostles and us - prayer.  Prayer is the core of service.  We cannot bring the Lord to others unless we know Him ourselves.  Mary’s prayer was always in her openness to God.  She knew the Lord was with her and she took joy in His presence.  Her words at the Annunciation are the epitome of prayer: “Behold, I am the handmaid of the Lord.  May it be done to me according to your word” (Lk 1:38).  Unfortunately, we, like the apostles, get so caught up in the things we are involved in that we lose sight of the Lord’s presence immediately before us.  We can get so wrapped up in our own plans, we forget that God is the one that not only matters, but the only one that will bring us joy.

Finally, Mary placed before the apostles one final essential for their ministry - hope.  Mary had hope in the most hopeless of situations.  Her hope was in the promise that God made to her which she knew would be fulfilled.  Even in her darkest hour, at the foot of the Cross, Mary did not lose hope but stood as a model of hope.

Like the apostles, we must be hopeful.  In a world that is filled with much that opposes the message of the Gospel, it is easy for some to begin to lose hope in Christ and in His Church.  We live a message of hope.  That hope is centered on the sanctity of each and every individual life, in the God-given dignity of family life and in the respect that we should have for all persons, especially the poor and those in need.  Hope does not disappoint, and hope gives life.  As bearers of the Good News, like Mary, we must be signs of hope in a world that needs that virtue so much.  As Mary prayed in the Magnificat: “He has shown might with His arm, dispersed the arrogant of mind and heart.  He has thrown down the rulers from their thrones but lifted the lowly.  The hungry He has filled with good things; the rich He has sent empty away” (Luke 1:51-53).   Mary’s life was a clear witness of hope to the Apostles as it is to us today.

As we move forward during this month of November, especially as we prepare to celebrate Thanksgiving, let us look to our patroness, Mary Queen of the Apostles, and give thanks to God for her.  May she instill in us, as she did in the apostles, humility, prayer, and hope.  They are so needed today.