Living the Truth in Love - Mary Guides Us to the Eucharist 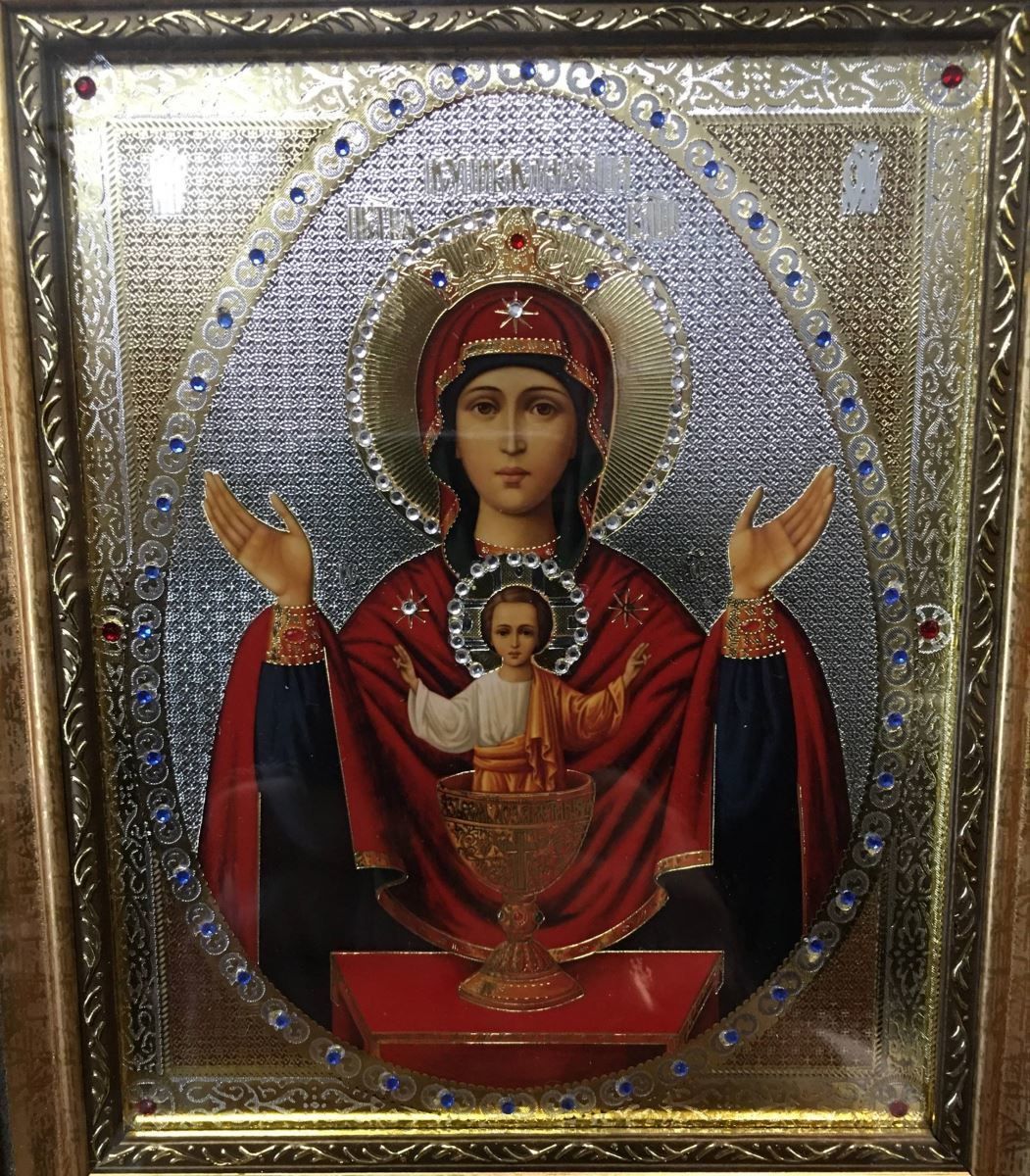 For a Christmas gift I received a beautiful Byzantine icon of the Blessed Virgin Mary standing before an altar with her arms outstretched in the fashion of a priest celebrating Mass.  In front of her is a chalice from which her infant Divine Son, Jesus, is standing forth with His arms outstretched in the same position as His mother.  The icon is entitled, Our Lady of Nicaea, since its creation dates back to 325, the year of the First Council of Nicaea from which the Creed we profess at Mass is derived.  The painting is also referred to as The Inexhaustible Chalice and The Womb has Become a Holy Table, pointing to the intimate relationship between Mary and the Eucharist.

I have hung this very moving icon in my office immediately below a copy of a painting of Mary entitled, Our Lady of the Host.  This painting by the French artist, Jean August Dominique Ingres (1780 - 1867), depicts Mary standing in adoration before an altar on which is a chalice and paten holding a standing consecrated host.  While a much later artistic work than Our Lady of Nicaea, it emphasizes the long history within the Church of associating the intimate role of Mary with the Eucharist.

Mary, at the Annunciation, conceived in her womb the physical reality of the Body and Blood of Christ.  Like the one who receives Christ into their very person at the Eucharist, Mary was the first to receive Him in a similar manner at the Annunciation.  The celebration of the Eucharist is truly in continuity with the Incarnation which took place when Mary said “yes” to the Angel.  There is a true relationship between the words of Mary at the Annunciation, “Let it be done to me according to your word” (Lk1:38), and to the “amen” of the person receiving the Eucharist.  The “yes” of Mary is a Eucharistic “amen.”  In this, we truly see her as the first among believers in regard to the Eucharist.

However, Mary’s “yes” involves the very essence of the Eucharist since through her the presence of the Word made flesh came into existence.  Her words at the Annunciation are more similar to the priest’s words of Consecration as they actually brought about the presence of Christ in her womb.  Furthermore, that real presence came from the very person of Mary.  The Body and Blood of Christ came from the body and blood of Mary as His mother.  Saint John Paul II spoke of this reality.  He frequently emphasized that, while Mary was not present at the Last Supper, she was there in a unique manner since it was at the Annunciation that Christ became incarnate.  Indeed, Mary is present at the celebration of every Eucharist since from her very flesh and blood came the flesh and blood of Christ.

In his encyclical devoted to Mary herself, Remdemptoris Mater, Saint John Paul II again stressed the fundamental relationship between Mary and the Eucharist.  Here he stressed that “Mary guides the faithful to the Eucharist.”  Indeed, she guides us to the Eucharist, not only because she guides us to the Body and Blood of the Son born from her, but because she leads us to that Eucharistic attitude of thanksgiving, which is what the word Eucharist literally means. Mary gave thanks always for what God had given to her by her realization of her complete dependence upon Him.  She allowed herself to be God’s instrument because she trusted His will completely.  She was open to Him at all times and openness to God is always the fruit of gratitude.  Just as Christ gave thanks and gave Himself to the Father at the Last Supper, so Mary always exemplified this Eucharistic attitude.

Mary also guides us to the Eucharistic attitude of sacrifice through which Christ’s sacrifice on the Cross and Real Presence in the Eucharist come about.  Mary stood at the foot of the Cross and gave herself completely.  She also gave her Son to the Father’s will by trusting in Him.  Mary’s sacrificial suffering was inseparably linked to the sacrificial suffering of Christ.  Saint John Paul II emphasized this in a Sunday Angelus address when he stated, “Every Eucharist is a memorial of that sacrifice and Passover that restored life to the world; every Mass puts us in an intimate communion with her, the Mother, whose sacrifice ‘becomes present’ just as the sacrifice of her Son ‘becomes present’ at the words of Consecration of the bread and wine pronounced by the priest.”  Mary truly guides us to the Eucharist and to a Eucharistic attitude.

Pope Francis has demonstrated his deep devotion to our Blessed Mother on many occasions both in his personal spirituality and in his official teaching.  It is obvious that he deeply appreciates the relationship between Mary and the Eucharist in the same manner as Saint John Paul II.  As the Cardinal Archbishop of Buenos Aires, Pope Francis participated in the 49th International Eucharistic Congress which took place in Quebec, Canada, from June 15-22, 2008. In this Congress he explicitly made reference to the teaching of Saint John Paul II.  He expressed that “we are aided by the vision of John Paul II, who invites us to enter ‘In the School of Mary, Eucharistic Woman.’”  He went on to emphasize, “If we wish to discover, in all its richness, the intimate relationship that unites Church and Eucharist, we cannot forget Mary, Mother and model of the Church. ... Effectively, Mary can guide us towards this Blessed Sacrament because she has a profound relationship with it.”  Pope Francis also participated in the Synod of Bishops on the Eucharist during the Pontificate of Pope Benedict XVI.  During the Synod he spoke frequently on the teaching of Saint John Paul II in regard to the intimate relationship between Mary and the Eucharist and of her role in leading us to it.