Living the Truth in Love - The Order of Virgins: A Prophetic Vocation 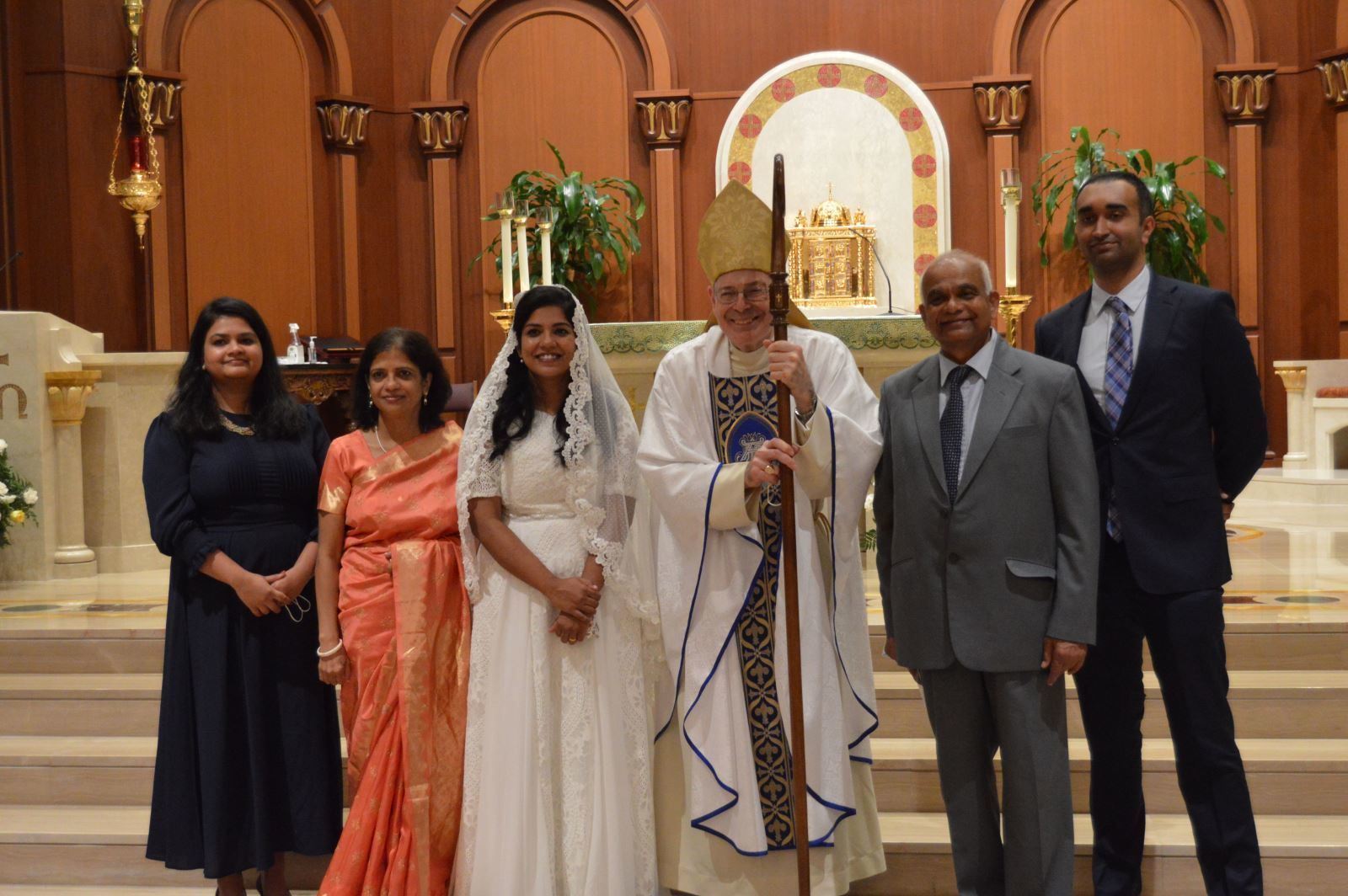 Simi, my sister in Christ, it was almost a year ago, on the Feast of the Annunciation, that you were to be consecrated in the Order of virgins.  Due to the restrictions imposed upon us by the coronavirus, that celebration was wisely postponed until today, the Feast of Our Lady of Lourdes.  You chose both days in honor of the Blessed Virgin Mary.  We are all so joyful to be here, your family, your friends, as well as those not able to be here but are watching this celebration through livestreaming.  This is truly a day for the Church, our Diocese and for all society so much in need of the word and example you are giving today.

A great deal has occurred since last year.  Obviously, the pandemic has been ever present and has caused a great deal of suffering, fear, uncertainty, and a continued loss of normalcy.  A great deal has also occurred in the world, our country, and our communities.  Heightened levels of mistrust are present, violence has become more prominent, and a new anger is present which touches almost every aspect of life.   It is more difficult to discern the factual truth of what is before us.  The ultimate truth of God is pushed further and further away echoing Pilate’s question to Jesus, “What is truth?”  It is obvious that we live in a context in which it is believed we can re-create ourselves in an alternate manner from that which God has made us in so many ways.  We are losing our identity as made in the image and likeness of God as well as being created by Him in a particular way.   The very meaning of marriage and family life is being lost.  As we celebrate the Feast of Our Lady of Lourdes, we recognize the need for radical healing in ourselves, in our nation and in our world and we look to the Virgin Mother of God as a healer through her Son.

Simi, today you make a public commitment in the Church which speaks directly to the healing that is needed.  You become a consecrated person by embracing a life of virginity so as to become the spouse of Christ, entering into a more intimate relationship with Him.  You become a visible sign to all of us that Christ is the Way, the Truth and the Life and it is a personal relationship with Him that is the foundation of all of our lives in the vocations to which He has called us, be it as consecrated men and women, priests, deacons, married couples, single persons, younger, older and in whatever daily occupations we carry out.   You will receive symbols that mark your consecration and spousal relationship: a ring, a veil and the Church’s constant prayer to God, the Liturgy of the Hours.  You will continue to live in the world and to carry out your daily life and occupation but with a consecration to the Lord that is sacrificial and at the same time life-giving for you and for all of us.

The Order of virgins has been present in the Church from its earliest times.  Some of the great saints of the early Church were virgins who also became martyrs.  Saints Agatha, Lucy, Agnes, Cecelia, mentioned in the first Eucharistic prayer, were among them.  As other forms of consecrated life emerged in the Church, particularly the religious communities, the Order of Virgins began to decrease until its revival in the Second Vatican Council.  Many centuries after its disappearance in a radically transformed historical context, the public witness of consecrated virginity renewed itself in a world that needed such witness.

On May 31 of last year, the Feast of Pentecost, our Holy Father, Pope Francis, addressed the consecrated virgins of the world on the occasion of the 50th anniversary of the reintroduction of the Order of virgins into the life of the Church.  He expressed to them, “Your vocation is a sign of the inexhaustible and manifold richness of the gifts of the Spirit of the Risen Lord, who makes all things new (cf. Rev 21:5).  It is likewise a sign of hope, pointing to the fidelity of the Father, who even today, awakens in the hearts of some women that desire to be consecrated to the Lord in virginity, lived out in a concrete social and cultural setting, rooted in a particular Church, and expressed in a way of life that is ancient, yet modern and ever new.”

Pope Francis often speaks of the need to dream.  He has done so as he opened this Year of St Joseph who was spoken to by God in dreams.  The Pope often speaks of the dreams of God and those of himself and recently published a personal book of reflections, Let Us Dream.  Speaking of the crisis we face today, he says in his book, “To come out of this crisis better, we have to see clearly, choose well, and act right.  Let’s talk about how.  Let us dare to dream.”  Virginity today and always has been a dream in which we can see clearly, choose well, act rightly and thus be possessed by the truth so much needed today and throughout history.

I would like to close my reflection with the words addressed by the Holy Father to all the virgins of the Church last year on Pentecost.  These words truly can be addressed to you today, Simi, as you consecrate yourself as a virgin in the Church and in our Diocese.  The Pope said, “I would say this to you: do not extinguish the prophetic nature of your vocation!  You have been called, not because of your own merits, but by God’s mercy, to make your lives a reflection of the face of the Church, the Bride of Christ.”  My sister, we are all grateful to you for daring to dream by heeding the call of a prophetic vocation and for being a visible sign of the need that we all possess for Christ who alone heals us and the world.

We pray to Our Lady:  Virgin of virgins, gate of heaven, inspire and accompany this, our sister, Simi, that she may have the gift of spiritual discernment.  As a pilgrim in the world may she live the dream of prophecy with freedom and courage and with determination and tenderness.   May the Lord, through His Mother, continue to bring to fulfillment the good work He has begun in you.