Living the Truth in Love - The Priest is for the People 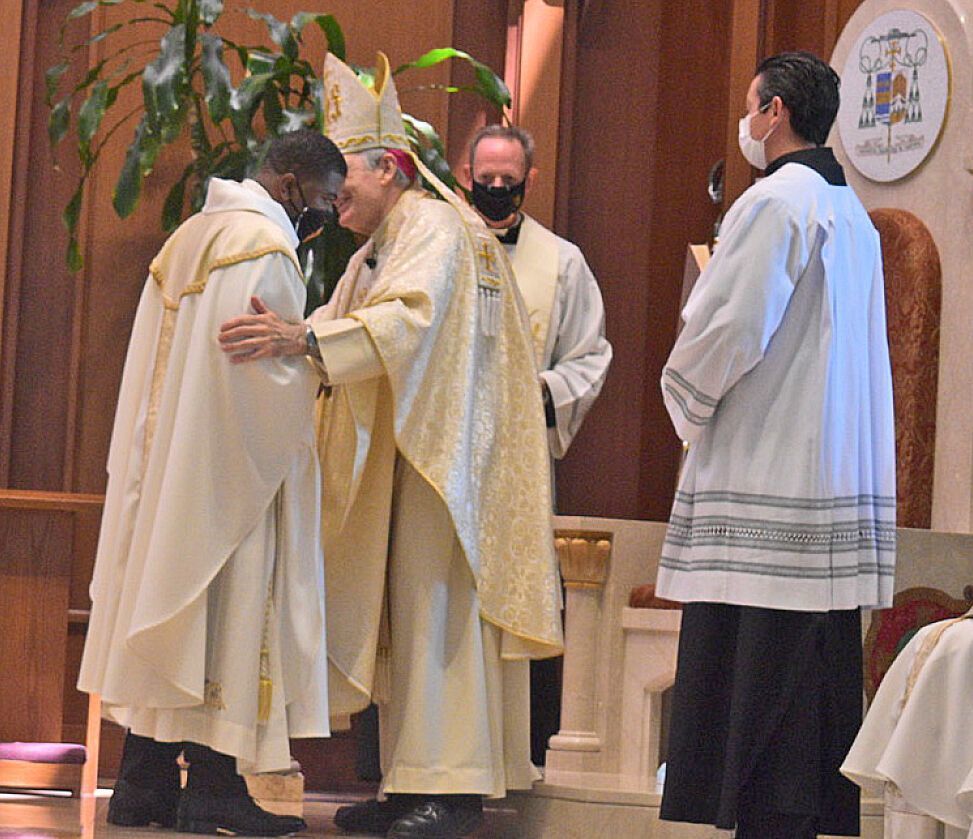 The readings which Deacon Alain has chosen for his Ordination Mass today are most significant, as they express the vision of priesthood as concentrating upon service to the People of God.  In the First Reading from the Acts of the Apostles, Saint Paul exhorts the presbyters at Ephesus to, “Watch over the whole flock of which the Holy Spirit has appointed you.”  Saint Peter, in the second reading, urges the presbyters of Asia minor to likewise, “Tend the flock of God in your midst overseeing it not by constraint but willingly as God would have it, not for shameful profit but cheerfully.”  Finally, the Lord Himself in the Gospel of Saint Matthew gives the example of caring for the flock as He “went around to all the towns and villages teaching in their synagogues, proclaiming the Gospel of the Kingdom, and curing every disease and illness.  At the sight of the crowd, His heart was moved with pity for them because they were troubled and abandoned, like sheep without a shepherd.”  My brother, Alain, always keep before you this message of service to the people in your priesthood and you will always know the true joy of ministry.  Also, remember that priests need people as much as people need priests.

In a recent press conference which our Holy Father, Pope Francis, held on his return flight from Iraq, he stressed the image of the priest as the one who serves the People of God and as one belonging to the People of God.  He spoke words very appropriate for you, Alain, on this happy day for you and for all of us.  He said, “A priest becomes a priest to serve, to be at the service of the People of God, not for careerism, not for money.”  Speaking in general to priests the Pope stressed, “Do not lose your closeness to the People of God to become a privileged cast of consecrated clerics.  Contact with the people saves us, helps us, we give the Eucharist, preaching, that is our role.  But they give us belonging.  Let us not forget this affinity with the holy People of God.”  What the Pope so recently expressed is very much in keeping with the words of the Scriptures which you, my brother, have chosen for the Mass of your Ordination today.

Alain, your Ordination also joins you in a unique fashion to your brother priests in the Diocese of Palm Beach.  How fitting today to hear Saint Peter address the presbyters as a fellow presbyter, emphasizing their intimate relationship.  Your identification as a diocesan priest is intimately linked to the presbyterate into which you are ordained.  As we reflect that priests need people, we also reflect that priests need priests.  You are ordained to assist your brother priests in their ministry in the Diocese of Palm Beach and they likewise are to assist you in yours.

The identity of the Diocese of Palm Beach is a unique one composed of many people of different cultures, backgrounds, and economic status.  Your personal identity as a Haitian born priest adds to the richness of this identity, as the Diocese has a large population of the Haitian faithful who are strong in their expression of faith and family.  They are very familiar with the challenges and sufferings of their native country which you have personally experienced in your life.  You will be called upon to serve the people of our Diocese in varied ways and will minister with your brother priests in assisting the needs of the whole Diocese to which you have committed yourself.

Being a priest and being a presbyter go hand-in-hand.  You are not ordained a priest to function on your own.  You become part of an extraordinary presbyterate.  You will collaborate with your brother priests so that the needs of every parish in the Diocese are best served.  In this context, each of our parishes is equal to one other and there is neither a compartmentalization nor hierarchy of parishes.

The celebration of the Eucharist will be the center of your life as a priest and through it you will be most closely joined to the people you serve.  Saint John Paul II referred to the words of the Consecration of the Mass as “a formula of life” for priests.  The more the words we utter each day become our own, “This is my Body, given up for you, this is my Blood, poured out for you,” the more we give ourselves to our people in the fullest way.  We give them our lives, with Christ, as we give them the Eucharist.  Immediately after your Ordination today, you will celebrate your first Mass.  All the actions of your life as a priest, including the celebration of the other Sacraments, will flow to and from the Eucharist which you will celebrate each day in the very Person of Christ Himself.

Just recently, Pope Francis granted permission for a seminarian studying in Rome to be ordained a priest on Holy Thursday when the young man’s medical condition of cancer took a turn for the worse. He was ordained a priest by one of the Auxiliary Bishops of Rome on April 1 and died on April 23.  In his homily for the Holy Thursday hospital Ordination the Bishop spoke, “As a priest, you will be joined with Jesus to make your body an offering pleasing to God.  Our priesthood, indeed, reaches its peak when together with the bread and wine, we know how to offer all of ourselves, the things the Lord has given us, and our very lives.”

The newly ordained priest, Father Livinius, spent the final twenty-three days of his life in offering Mass each day from his hospital bed as a priest friend recounted.  This priest said, “His altar was the (hospital) bed, where he was able to unite his sufferings to those of Christ.  He lived and renewed his Eucharist in a strong and visible way, and this is a great lesson for all priests.  His gift was of a different priesthood but at the same time, the same as that of every priest.  His particular union with the sacrifice of Christ teaches us to celebrate with greater awareness.”

Father Livinius’ Superior in Rome expressed, “I have thought a lot about my priestly life: Livinius may not have had the opportunity that I had to proclaim the Gospel and serve the People of God, but the Lord chose him in his very special priesthood by uniting them with him.  It makes me think a lot about praying and giving thanks for the priceless gift we have received out of love and only out of love.  I am sure that his offering, combined with that of Christ, will do good to the Church and for the priests called to fall in love with their ministry. ... We are grateful to Pope Francis for this gift of fatherhood and tenderness.”

As we continue with our Ordination, we do so during the Year of Saint Joseph, on the very Feast of Saint Joseph, the Worker.  As I reflected in my homily for our Chrism Mass this year, Saint Joseph is a very fitting model for priests.  Today, we also begin the month of May in which we honor Mary as our Mother.  My brother, Alain, may the Holy Family be before you today and every day of your priesthood.  You will become an integral part of the family of the people you will serve, and an important aspect of your priesthood will be to join families in the vocation to which they have been called.  May the Lord continue to bring to fulfillment the good work He begins in you on this day!