Living the Truth in Love - Lord, I Love you 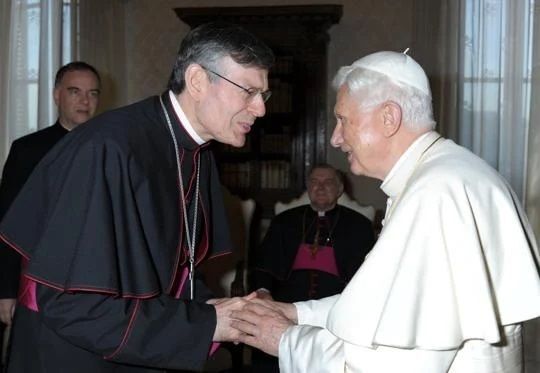 The final words of Pope Emeritus Benedict XVI, as he lay dying in his bed on Dec. 31, were, in Italian, “Lord, I love you!” These words were heard by the nurse who attended him just a few hours before his death. His personal and faithful assistant, Archbishop Georg Gänswein, recounted, “I was not there at that time, but the nurse told me shortly afterwards. Those were his last comprehensible words because after that he was no longer able to express himself.”

The final words of this faithful Christian, priest, bishop and pope were simple, sincere, and profound words which summed up the life of an extraordinary man who made a deep impression upon the life of the Church and of the world. They reflect the simplicity and complexity of Pope Emeritus Benedict XVI, who was an intellectual, scholar, theologian and man of faith of unparalleled nature. His greatness of mind and spirit was parallel to the depth of his humility. The life of Joseph Ratzinger was always centered on a living relationship with a loving God. He lived his life in this manner, not concerned about impressing but about blessing. He now shares in the fullness of life, as a priest forever, with the Lord he served and loved so sincerely and profoundly all during his life.

Pope Emeritus Benedict XVI wrote voluminously during his life as a priest, bishop and as the Chief Shepherd of the Church. He also wrote a great deal in his monastic retirement reflecting upon the meaning of his life and the call to holiness, which we all possess. All of his writings center around God, not as judge and ruler, but as a loving Father who wants to possess and be possessed by His children.

It was no surprise that Pope Benedict XVI’s first encyclical was titled Deus Caritas Est, God is love. As he stated in that encyclical, “In the world where the name of God is sometimes associated with vengeance or even a duty of hatred and violence, this message is both timely and significant. For this reason, I wish in my first encyclical to speak of the love which God lavishes upon us, and which we must share with others.” It is likewise no surprise that Pope Benedict’s final encyclical was titled Caritas in Veritate, Charity in Truth. As he stated in that encyclical, “Love — caritas is an extraordinary force which leads people to opt for courageous engagement in the field of justice and peace. It is a force that has its origin in God, Eternal Love and Absolute Truth.”

One of the greatest acts of love, and justice, on behalf of Pope Emeritus Benedict XVI was his free resignation from the papacy in 2013. He was the first pope in 600 years to give up the papacy, and his decision was based on his love for the Lord and for His Church as he realized that his failing health would prevent him from carrying out the office in the years before him. It was a difficult decision but one based on nothing less than love itself. It revealed a depth of the former pontiff’s spirituality and deep relationship with the Lord in the service of the Church. His decision to live a monastic life after his retirement was a living example of his personal love for Christ and a tremendous blessing for the Church. In this regard, Pope Francis reflected after the death of his predecessor, “With emotion we remember his person, so noble and so kind. And we feel so much gratitude in our hearts: gratitude to God for having given him to the Church and to the world, gratitude to him for all the good he has done, and above all for his witness of faith and of prayer, especially in these last years of his retired life. Only God knows the value and strength of his intercession, of his sacrifice offered for the good of the Church.”

While the style and the personalities of Pope Francis and Pope Emeritus Benedict XVI were different, they were very much united in regard to their love for the Lord and for the Church. Pope Francis had a strong and intimate bond with his predecessor and they both shepherded the Church in the same manner, especially in regard to emphasizing the love and mercy of God. There is a great lesson which both of these men give to the Church in regard to using the personalities and talents which God has given to us and not to be put in a mold which goes against His creation of us as unique individuals. The popes of recent times have articulated the teaching of Jesus Christ, through the Church, in a manner which does not detract from His teaching but in a manner that uses the gifts which He has given to all of them. Pope Emeritus Benedict XVI did not make the same decision in regard to resignation as did his beloved predecessor, St. John Paul II. He was not bound by a mold. There is much more similarity between Pope Francis and Pope Emeritus Benedict XVI in regard to the essentials of life and faith than those who wish to advance their own agenda for the Church would have us believe. While I am pleased with the positive attention given by the media this week to Pope Emeritus Benedict XVI, it is disheartening to hear some commentators’ misleading contrast of Benedict and Frances as liberal and conservative in regard to basic matters as marriage and abortion. The two popes articulated and continue to articulate the teaching of the Church in the same manner with no equivocation.

I personally was privileged to have been in the presence of Pope Emeritus Benedict XVI both before and after his papacy. As a student, I listened to him as he was Prefect of the Congregation for the Doctrine of the Faith. As a bishop, I had the same privilege, but more with a voice to express my opinions before him. I had the privilege of being with him as the pope for his visit to the United States in 2008, as well as on an ad limina visit with him in 2012. On all of these occasions, he came across as a holy, sincere, humble, committed, “noble and kind” person. He made one feel at ease in his presence and through that, made one sense the love of God. He has always given me the security that God has created us all as individuals, with different personalities and talents, but all for one purpose and that is for the love of the Lord.

As the days go forward, the world and the Church will continue to learn much from what Pope Emeritus Benedict XVI has left to us. His words, his example and his writings will continue to bear much fruit, so much needed in our world. We are truly blessed with our present Holy Father, Pope Francis, and despite erroneous opinions and agendas, there is no substantial difference between him and Pope Emeritus Benedict XVI in their teaching and governing of the Church. Pope Francis has rightly canonized several popes during his pontificate. It is my hope that he begins the process for Pope Emeritus Benedict XVI as soon as possible. Such recognition would never really have mattered to this humble man whom we have every firm reason to believe is now already among the saints, as a priest forever and praying in the Eternal Liturgy, “Lord, I love you!”