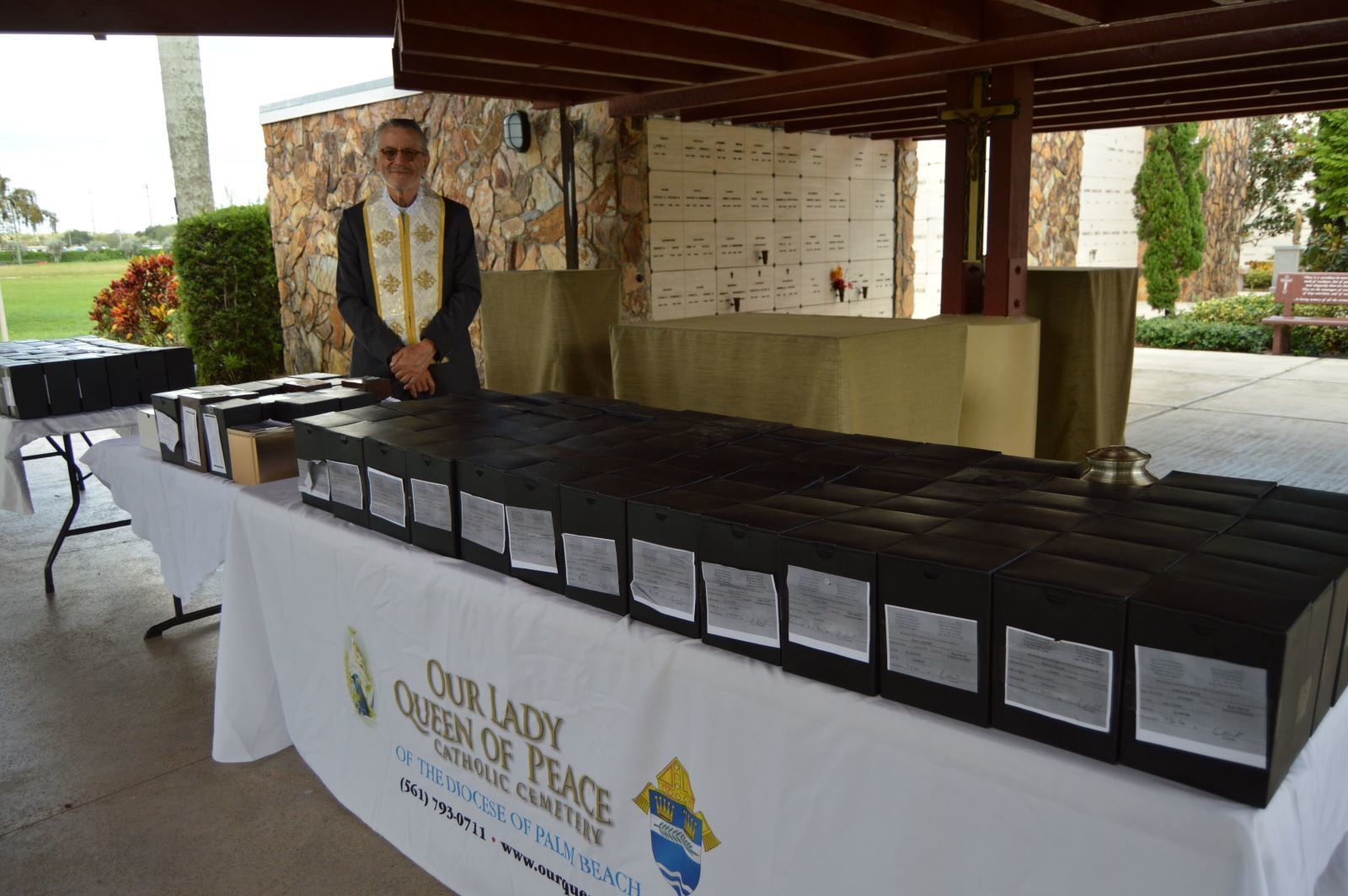 “I love you, I love you,” said Father Gabriel Ghanoum, after each name was called from a long list of 171 deceased individuals for the No One Buried Alone Memorial Service, Oct. 29, 2020.

Father Ghanoum, the director of spiritual care and palliative care at JFK Medical Center in Atlantis, stood over row after row of small black boxes that held the cremated remains of individuals he considers his “adopted family.”

“When there isn’t any family or friends to claim the ashes of the deceased, I claim them as my own family and see to it that they receive dignity and compassion in death,” he said.

Since 2011, when the No One Buried Alone Ministry began, Father Ghanoum has claimed hundreds of cremated remains from various funeral homes throughout the Diocese of Palm Beach and has seen to their proper burial at Our Lady Queen of Peace Cemetery in Royal Palm Beach. He expressed that it is a sad but, unfortunate truth that many of the elderly in nursing homes and homeless indigent people pass away with no one to bury them.

If family are unable to be identified after the passing of their loved one, Palm Beach Human Resources assumes the care of the cremated remains and conducts a national and international search for any possible relatives. If after three months the cremated remains go unclaimed, Palm Beach Human Resources signs over the ashes to Father Ghanoum, deeming him the legal guardian of the individual’s cremated remains. He then collaborates with Our Lady Queen of Peace Cemetery to conduct a compassion service and inter them in the Compassionate Crypt of St. Joseph of Arimathea, dedicated to the saint who, according to the gospels, assumed the responsibility for the burial of Jesus after his crucifixion.

“Most of these individuals had a deep longing for connection in a world of disconnection. No one enters the world alone but, we often leave alone. Through this ministry, we entrust them to the loving mercy of God,” remarked Father Ghanoum.

Because of the COVID-19 pandemic, the No One Buried Alone Ministry has had to postpone the memorial service until a time when stronger health and safety procedures could be implemented. In addition, the number of cremated remains overseen by Father Ghanoum increased in recent months due to these individuals’ passing from the respiratory disease. As a result, the No One Buried Alone Ministry interred the largest number of urns in its almost ten-year history, 55 of which Father Ghanoum personally attended to at JFK Medical Center.

“During the pandemic, I spent a lot of time providing emotional and spiritual care to patients that needed it most in the final days. Now that they are in eternal life, we pray for the healing of their families of origin, that one day they may be reunited in heaven if they are never reconnected on earth,” he said.

If family should be discovered, the cemetery works to reunite them with their deceased loved one. The No One Buried Alone Ministry is an ecumenical ministry open to all regardless of their faith or background.

“When we name each person from the list, I say ‘I love you’ because love was absent in their final moments on this earth. These are our brothers and sisters in Christ, we love because God loves them. That is enough and all that matters,” said Father Ghanoum.

Typically, this memorial service is attended by cemetery staff and a few local parishioners who have volunteered to proclaim the scripture readings and the names of the deceased individuals. At this particular service however, one couple joined the small group to witness the blessing of the urns.

Mark and Katalin Filtranti, parishioners of the Cathedral of St. Ignatius Loyola, arrived to the service with buckets of flowers—171 flowers to be exact—one for each of the individuals honored that day.

Katalin shared that she was there to honor Michael Moriarty, a homeless veteran they met one day driving down 45th Street and Military Trail.

“Something compelled me to stop and speak to Michael,” said Katalin. “He was in a wheelchair and looked sickly and like he just needed help. I’m not sure what Michael’s life was like that it brought him to this moment but, we knew we needed to reach out to him.”

Mark mentioned that he and his wife visited Michael a few times on the street, getting to know him bit by bit. Michael eventually shared that he was raised Catholic, was a Vietnam War veteran and had stage 4 cancer, a sickness the Filtrantis nursed him through for a year until it claimed the man’s life.

“I was with him everyday while he was in Hospice care,” said Katalin. “I even became a Eucharistic Minister so that I could bring him Holy Communion and care for him spiritually.”

Mark and Katalin cared for Michael one last time, praying over his urn as it was interred in the Compassion Crypt of St. Joseph of Arimathea.

After he gave the final blessing, Father Ghanoum said, “Every one of these people is a good person. Today, we celebrate their realignment with love, dignity and God.”

Our Lady Queen of Peace Cemetery is located at 10941 Southern Blvd., Royal Palm Beach. To learn more about the No One Buried Alone Ministry at Our Lady Queen of Peace Cemetery, visit ourqueen.org or call 561-793-0711. Follow the cemetery on Facebook and YouTube @OurLadyQueenofPeaceCemetery. To contact Father Gabriel Ghanoum regarding spiritual and palliative care, call 561-548-3942 or email care4u@hcahealthcare.com.