Principal draws on experience as a student-athlete 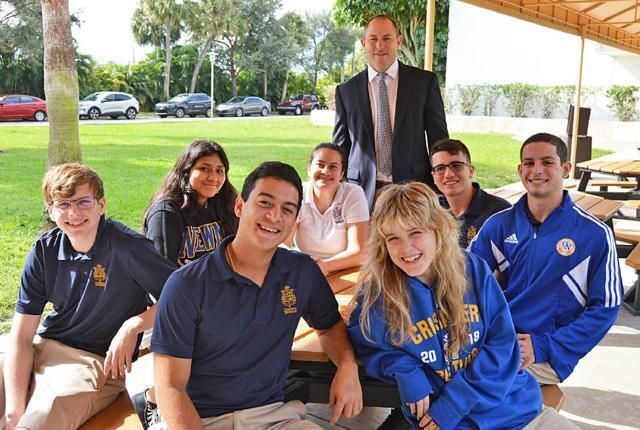 This is Part 3 of an ongoing series of articles spotlighting the principals who are leading Catholic schools in the Diocese of Palm Beach.

WEST PALM BEACH | On the baseball diamond, as a player and coach, Wes Logsdon learned about teamwork: double plays, home runs and sacrifice flies. Now in his first year as principal of Cardinal Newman High School, from which he and his wife graduated in 1998, Logsdon is putting into practice the concepts he observed as a student-athlete and lifelong learner. Be it from his parents, coaches in high school and college, professors or fellow educators, the lessons have been invaluable.

“You can never stop learning because you don’t have all the answers — ever,” Logsdon said. Being a school administrator, “a lot of everything we do is team-oriented.”

Formerly Cardinal Newman’s vice-principal, he started working at the high school as dean of students five years ago. Previously, he taught eight years at a private school in Palm Beach County and three years at a public school in Orlando, along with coaching baseball, golf and softball at various times.

Besides a bachelor’s degree from Piedmont College in north Georgia and a master’s in educational leadership from Nova University, Logsdon holds a law degree.

“When I graduated from law school, I knew that I didn’t necessarily want to practice,” he said. “In that regard, I thought I was going to want to pursue alternative career paths with my degree. My college teammate and roommate, who wanted me to coach with him for years, persuaded me to teach in a law program at the school where he was coaching and, long story short, I started doing that and fell in love with education.”

That newfound affection for teaching gave direction to his career path and led him back to Palm Beach County. Asked about his career highlights, Logsdon said that being Cardinal Newman’s principal at age 42 is the pinnacle so far.

“I’ve never been someone who keeps ribbons and trophies of the things that I’ve done because, being in education, it’s not about me,” he said. “Any highlight I have involves the kids I’ve been around or been able to help get to where they want to go, whether that had been coaching, in the classroom or now in leadership.”

Logsdon’s Catholic faith is a mainstay of his work life, he said, guiding him in the way he treats people and understands his role.

“Growing up Catholic and being at Cardinal Newman and teaching the idea of servant leadership is very important to me, and I need to be able to reflect that daily,” Logsdon said. “I try to embody that by showing selflessness among the kids and how important it is to pay attention to others and understand what others may be going through, or helping others and understanding that this school is a community and that we have to be able to serve others.”

He credits the faculty for helping make Cardinal Newman known for academic excellence. Three of the current teachers taught him when he and his wife, Sara, were students there. He and Sara didn’t date each other back then. “She was much, much cooler than I was in high school,” said Logsdon about his wife, who is a teacher at Rosarian Academy. They have three daughters, ages 11, 10 and 6.

Moving from the classroom to administration has been an adjustment for him. As a teacher, you have a lesson plan to follow throughout the semesters. As a principal, you wake up in the morning and have to prepare yourself for just about anything, he said.

“You could have the best-laid plans, but those can get destroyed pretty quickly in the morning, or you could have a very smooth and seamless day. It just really depends,” Logsdon said. “You never know what you’re going to get, so being flexible, being ready to work with the team around you and trust everyone around you is really the biggest part of it.”

At Cardinal Newman, he aims to lead in developing its 595 students, not just academically, but in spirit, mind and body, Logsdon said, striving to help them become young men or women who are compassionate, respectful leaders and ready for what life will throw at them. Being in the position to help make that happen is a delightful opportunity.

“To continue to do that and continue to see us grow and do the things we do really gives us a wonderful feeling at the end of the day,” he said.

For more information about Cardinal Newman High School, visit https://cardinalnewman.com/ or call 561-683-6266. To learn about all schools in the Diocese of Palm Beach, go to www.diocesepbschools.org.