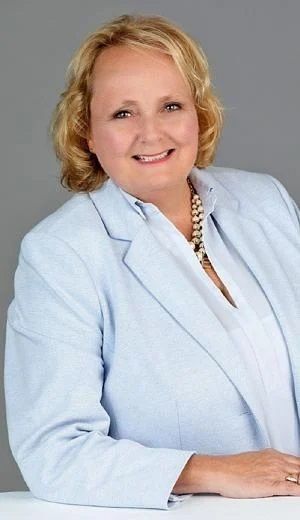 RIVIERA BEACH – For Ellen Wayne, beginning her new job June 27 as CEO and executive director of Catholic Charities of the Diocese of Palm Beach is a homecoming of sorts. That’s because she has returned to heading a Catholic Charities agency like the one she previously directed in New York State.

For 12 years, from 2007 to 2019, Wayne was executive director of Catholic Charities of the Finger Lakes in the Diocese of Rochester, New York. Then she became commissioner of the Wayne County Department of Social Services, which she held until last month. Even in that governmental position, she demonstrated the heart for service that was nurtured in the Jesuit Volunteer Corps, a formative program in which college-age students live in community alongside those they serve.

“They have this motto called ‘Ruined for Life,’ and I guess without a doubt it gives you a lens to actually look at the world and kind of channel your energy and resources,” Wayne said. “Some of the tenets of that particular volunteer corps stayed with me for my entire adult life.”

Her educational path took her from the University of Scranton, earning a bachelor’s degree in child and family studies, to a master’s in public administration at the State University of New York at Brockport, and a doctorate in executive leadership at St. John Fisher University in Pittsford, New York.

“My dissertation was specifically around Catholic organizational identity. And so, I’ve really taken a purposeful path, if you will, in terms of focusing my energy and attention around issues related to poverty and the poor and vulnerable, and now happily returning to the opportunity to blend the work with my faith,” said Wayne, who replaced Frankie Chévere as Catholic Charities CEO in the Diocese of Palm Beach.

Having lived and worked in the Finger Lakes region nearly her whole life, there are many similarities to South Florida, she said. One of those commonalities, she said, is “poverty masked and hidden amid great wealth.”

What she has seen in the Diocese of Palm Beach is a desire among key groups of people to tackle the difficulties, raise awareness and create opportunities for change.

“For me, part of my challenge is to figure out who are my go-to people in this new location,” Wayne said. Several leaders from across the state have already reached out to offer their assistance.

As an outgoing, focused leader, Wayne hopes to build relationships with a wide range of community partners. People have varied opinions about issues today, but that shouldn’t keep them from working together on common challenges, she said.

“If I learned nothing from COVID it was that people had their own responsibilities and their own agendas and their own way of doing things. Well, when the county is shutting down and you need to be responding to people in need, you’ve got to kind of roll your sleeves up, find a common ground and a way to work together,” Wayne said. “And I think that I’ve tried to maintain that way of doing business regardless of what situation and circumstance I’m in. Hopefully that is something that serves me well in this position.”

She has been impressed at how committed the local Catholic Charities staff is in being the “living, breathing mission in action.” “We certainly have significant challenges facing us right now as a nation, as an organization and as people of faith, and increasingly I’m confident that this team is up to the challenge.”

One of those challenges is the agency’s reaction to the recent U.S. Supreme Court ruling overturning Roe vs. Wade, Wayne said.

“We’ve got to continue to make sure we’ve shored up our response to families because we can’t celebrate a pro-life decision and not back it up with the supports needed for those children to become healthy, thriving adults,” she said. “We can translate that mindset into all of our other programs to make sure that we’re constantly providing services to vulnerable populations. Dignity of life isn’t just at one stage, it’s across the continuum.”

In the short term, Wayne said her goal is to look at the agency’s structure from an objective outsider’s perspective to determine if it is right-sized and that its resources and programs are balanced and responsive. She is aware that the agency will celebrate its 40th anniversary in two years.

“It’s an opportune time to kind of recommit ourselves to the mission and determine who we need to be to continue moving this organization forward and meeting the needs of the people we serve,” she added.

Important partners in Catholic Charities’ work are the board of directors and Bishop Gerald M. Barbarito, Wayne said. During the search and interview process that ended with her being hired, she witnessed considerable commitment of time and energy from board members. And she looks at nonprofit boards with a critical lens because she has taught the subject at St. John Fisher University’s doctoral program.

“I had the opportunity to get to know them in the boardroom, if you will, as well as through a little bit of conversation, and what I found is they’re vast in their knowledge and experiences in their particular fields and careers, but collectively, man, are they dedicated to this organization,” Wayne said. “They are just 100 percent invested in wanting to see this organization continue to succeed, not just for the sake of success, but because they truly do realize the importance of the work that’s happening. That’s huge.”

Regarding the welcome she has received from Bishop Barbarito, Wayne said, “I appreciate what he’s communicated in terms of his support for the work that we do, and hopefully we continue to live up to that expectation that we’re the agency that will respond and do so for a long time coming.”

Wayne added that she looks forward to becoming involved in the community, through parish and civic groups. She also tries to be involved with groups that parallel the work she does, making the region more welcoming to a diverse range of people.

“I think a lot of what I do is intended to help me stay current and relevant on needs and trends, but also provide an opportunity to meet people whose paths in life have been different than my own, so I can continue to broaden my view and perspective,” Wayne said.

A mother of three sons and stepmother to two daughters, with her husband, John, a retired sergeant with the New York Department of Corrections, Wayne said moving south was part of their long-range plan as family members moved toward warmer climates. They were more familiar with the Orlando area, and hadn’t visited farther south until recently.

“We’re in the process of feeling our way around and figuring out where we’re going to call home. But that’s great because I get the opportunity to visit different parishes and learn neighborhoods and what’s distinctive about the different communities around the diocese,” she said.

Desiring to become familiar with people and challenges in the diocese, Wayne provided her office phone number (561-360-3339) and email address (etwayne@ccdpb.org).

“I realize that now I’m new to this area people are going to want to see what makes me tick,” she said. “I’m open to conversations, but I also hope that what they learn from me is that my perspective will be what’s in the best interest of the people we serve. That really is what the mission is.”

For information on the programs of Catholic Charities and how to donate time, talent and treasure, visit www.ccdpb.org.